Virtue Revel (力天使リヴァエル, Rikitenshi Rivaeru) is an angel in the 5th rank of the Hierarchy of Angels and the first Virtue Luka encounters. She has the unusual power to reincarnate beings into new existences.

In Chapter 3, she guards the Forest of Spirits to prevent Luka from reaching Gnome.

“A Virtue angel who belongs in the fifth circle in the angel hierarchy. Her ability lies in being able to reincarnate the souls of the dead into new existences. She can reincarnate favoured individuals using their own genetic information. Or, she can reincarnate unfavourable people into a completely new existence. Due to her special abilities, she receives many special missions directly from Ilias.

When she has to reincarnate someone still living, she will first melt down their body. The intense pleasure felt during this process will bring the reincarnee great joy in being reincarnated.”

Revel spends a lot of her turns doing nothing, so a counter-attack like Daystar is not appropriate to use; Ninefold Rakshasa should be used instead. However, keep Fallen Angel Dance going as both it and Guard are needed to avoid defeat from Holy Return, as noted by when a hole opens up in her groin area, or simply use Daystar against it. At times, she may use Holy Umbilical Bond to restrain Luka, so Struggle when needed. Her Holy Umbilical Bond does a lot of damage, so Alice’s Eye of Recovery may be needed.

If Luka loses, Revel pulls him into her body and drowns him in digestive juices, where he ends up popping out of her body as nothing but a mere egg.

“You who should’ve been reborn, instead came here without being reborn? I’m surprised myself. Revel only has powerful Binding techniques, so you must escape as quick as you can. Her most powerful move that requires preparation can only be avoided with Fallen Angel Dance and Guarding. Also, your counter skill is not very good for this battle. Now go, oh brave Luka. …By the way, what do you want to be in the next world?” 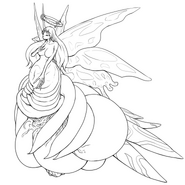 Drawn by Delphinus
Community content is available under CC-BY-SA unless otherwise noted.