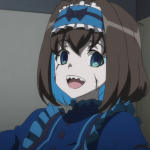 Hi, welcome to MonsterGirlQuest Wiki! Thanks for your edit to the User:Zokkun page.

Before now, I never had to extract any of the arc.nsa folders. If I needed some CG for my scenarios, I just went to a mod's story.ini file, punched in whatever waifu I wanted, and had her appear on a white or green background.

However, ol' C0var1ant, being the foxy devil he is, recommended Crass on Ginrikuzuma's talk page, and it runs like a dream. Dunno if I should put a link for it here. But if you googlesearch Crass or Crage extractor, it should pop up pretty quick. When you try and run it, the computer will ask you what program you want to use to run it. Choose WinRAR and it'll do the rest. Let me know how it works out for you.Viper 121 (talk) 18:35, October 20, 2012 (UTC)

the picture in your profile is Druella from one of Kenkou Cross's artbook: Monster Girl Encyclopedia World Guide 1: Fallen Maidens.

Kenkou Cross is Artist that responsible for designing Alice and Erubetie. In addition to contributing to this game, he also released several different Monster Girls Artwork and Artbooks. Some of his Monster Girls setting is little EXTREME though, at least compared to MGQ as it mainly focusing on corruption genre...

That's odd. The program (or at least the folder for it) should be extracted in the same folder it was saved in. It should be called crass-0.4.14.0 or something like that. If it doesn't turn up, have the computer do a filesearch on Crass.

It still won't run? Even when you add mon_labo folder to the root directory and plug in the new nscript file? Sorry, buddy. But I'm officially out of ideas. I guess you are gonna have to download part 2 somehow. Hope you can call in a favor to that pal of yours. Viper 121 (talk) 02:27, October 24, 2012 (UTC)

Oh, ya already got a copy of MGQ2 backed up? Then you don't need the mon_labo folder for jack squat. Only MGQ1 uses mon_labo for its sidestories. MGQ2 uses the mod folder for its sidestory needs. If you wanna run a sidestory, yer better off doing it on MGQ2 since, yeah, MGQ1's sidestory section is a little glitchy. Viper 121 (talk) 18:30, October 27, 2012 (UTC)

HeinrichTaleForChapter1 should work A-OK, whether ya plug it into MGQ1 or MGQ2. The reason why it's for MGQ1 is that it includes CG that's not in the first chapter, like Black Alice, Undine, Salamander, and Ilias's smug/crazy CG. But it should run for MGQ2 just as smoothly. Just follow the steps for adding scenarios I rattled off in the side story comments section, you should be off to the races. Viper 121 (talk) 05:09, October 30, 2012 (UTC)

Hey there, Zokkun! That's a pretty unusual error you've got there. I'm assuming you're already using the default nscript.dat instead of the Cecil nscript.dat? If not, I included a backup of that in Passion for Decay, I believe. But again - I think you already have the normal .dat file.

Both require part 2 - do you have that installed? It could also be that they are listed differently in list.ini and the mod/Rapture or mod/FarewellToFriendsWithBenefits.

The last thing that comes to mind, is try running the game either in applocale or with administrative privileige (right click mon_que.exe, and run as administrator. Good luck, hope these help! OldSlashFriend (talk) 13:49, November 16, 2012 (UTC)

Hmn, that is very strange. I can't duplicate your problem - some of my stories conflict with a file included with the Cecil Side Stories, a version of nscript.dat. If you installed that recently, it might cause that error. Applocale - or Microsoft AppLocale - will tell your computer to 'read' text in Japanese, sometimes solving weird formatting errors. Do you think you could take a screenshot of the crash and upload it to my talk page? No rush, but I would certainly like you to be able to play my scenarios! If you are busy or it's too much trouble, that's fine - but hopefully we can figure it out! OldSlashFriend (talk) 00:00, November 20, 2012 (UTC)

I sent you a message on facebookk,you should see it,if not the ints weird,anyway if you cant see it then just go to my page on here and there is a link to my facebook account

Is there an official website for the monster girl encyclopedia (mge)?

I was hoping that since you have that picture with the words "Badass Succubus, Druella Lilim" under it, you would have some info.

No but, it is a Book that you can Purchase

Retrieved from "https://monstergirlquest.fandom.com/wiki/User_talk:Zokkun?oldid=25932"
Community content is available under CC-BY-SA unless otherwise noted.