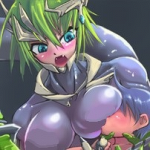 Hi, welcome to MonsterGirlQuest Wiki! Thanks for your edit to the Monster Girl Quest: Paradox page.

Hello, there, I have undone some of your  category additions, they may be correct and accurate, but we have a blog and a message on the front page alerting members to hold fire on info until the first english patch comes out.

Just to clarify, while information from the demos are okay, anything from the full game, even from screen shots, need to be held back for the moment.

where did you get the picture of the oni

Hey Rjwstar, do you mind I ask you to tone back some of the spoilers? I really appreciate all the help you've had on Paradox pages but most of the people come here because they're waiting for Paradox and need something to tide them over. If people are spoiling the plot or characters for themselves when they could playing the game, that's their problem, but right now the game is barely translated and this wiki is their main source of information. If I may, try and keep most backstory information and plot events vague or non-existent until after Paradox is released. In any case, I thank you for all the work you've put in.

Are you certain? I thought that the Promestein/Zion/Gnosis originated from the Paradox world, but they learnt how to travel between dimensions. Meaning this Micaela is the leader of the Seven Archangels. After all, Gnosis wouldn't have been able to beat her if she weren't the leader of the Seven Archangels, which she explicitly mentions: "Had she the power from when she was in her prime, I would have had no chance of winning... How sad. It's pitiful, really." It's just that Micaela's power was severely weakened due to her time spent on earth.

As for the LoC one, isn't that just a 'copy and paste' of the Micaela in her prime? But hey, if you're certain they're both completely different then I appreciate the correction.  I-honestly-don't-know (talk) 02:37, August 13, 2016 (UTC)

Yes, I'm sure. Promestein refers that she came from a world where Ilias and seven archangels(which Lolias didn't know) wiped out all of the monsters(including Alice the 1st&6 ancestors). She also refers that Micaela had been promoted to the leader of the seven, Lucifina retired, thus Eden had promoted to the 1st seraph, then Ilias created second generation seraphim(Zion, Gnosis) to fill the gap. About these key lores, Japanese fandom already made the full key lore analysis of paradox chapter 1 last year. You can see it through the link. [1]

As for the analysis, I would like to read that, but I don't understand Japanese. I presume google translate wouldn't be very reliable? I-honestly-don't-know (talk) 15:19, August 13, 2016 (UTC)

Just wanted to ask, where did you get your profile picture?

Hey, which one of Luxuru's quotes suggest that only females can become apoptosis?

Retrieved from "https://monstergirlquest.fandom.com/wiki/User_talk:Rjwstar?oldid=96419"
Community content is available under CC-BY-SA unless otherwise noted.