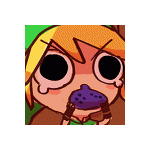 Hi there. Im glad someone has put up an MGQ wiki! I was wondering if you plan on adding the "loss"rape scenes to each girls wiki page. You see with my computer it wont let me play the game so i cannot see the sex scenes (there are a couple on youtube, but thats all) Im sure there are others out there that share this problem. So care to help us out?

Hey, no worries, glad to be involved. :)

Hey there! Thanks for making this Wiki. In fact, I have an idea in order to get this community going and the pages editing faster. Hope to hear back from you soon about this idea :3

Alright i made an account here (Im Cory, the one who left the message a while back) Im going to be doing my best to set up the loss scenes as they pop up on DailyMotion, as i am unable to play the game right now because i dont have part two... and for some reason the damn thing says i NEED part two in order to play the game. Which sucks. Anyway if there is anything else i can help you with dont be afraid to ask. Ill also be doing general edits and page edits as well. So... whats this idea?

Hello, I don’t know if you’re the one I should be asking to, but is there a way to modify file titles? There are many files with either completely random or wrong names, and I would like to edit them.

Hey Juni, feel free to drop by on the IRC sometime, we seem to be gathering steam on nailing down the page styles and content on the wiki and would be glad to have your input. :)

Hey Juni. I've just been looking at the wiki design admin function. Was there anything in particular you wanted for colour schemes or background pictures? I should be able to knock up some tweaks if you want them. :)

Hello was wondering if i should convert all pics to png. from jpeg (those i've posted) for better image quality and increased size, especially for the monster pages. Valourtore 08:52, April 24, 2012 (UTC)

I'm making a few, got a simple tutorial one finished. Also doing a few others to help me learn the workings, including a Beelzebub and maybe a pallette swap dark slime thing. Also found some custom CGs too, though the quality isn't astounding.

I saw that someone with the name Juni212 joined the MGQ-fan group on DeviantArt and I wanted to check if that was really you. If you are I might get be able to get the group-head to promote you.

I've been granted administrative authority over several other wikias. Do you remember how 2 give promoshuns? Shadowblade777 (talk) 05:37, March 19, 2013 (UTC)

First, welcome back Juni
Secondly just a quick update for the latest changes / additions Mermaid, [[User:ALAKTORN|Alaktorn] and myself are working on at the moment:

I like both of the infobox toggles, and the Chpter 3 Spoiler Warning is a great idea. Just an idea though, most other wikis play around with the warnings like that by using quotes or images from the series it's for. That seems like something that would be great as an asthetic touch.Juni221 (talk) 21:09, May 4, 2013 (UTC)

true, how about the official Chapter 3 cover, once it is out?
Or if that is too small I vote for Alice her status image (

) but then a cut out of it ofcourse

And done :D
You can now use the images of Alice and the 4 heavenly knights by putting the letters a through e in the place of the X in {{CH3_spoiler|X}} and if you just do {{CH3_spoiler}} it will keep the current warning sign. If more images need to be added just upload the file with the naming format "Face_X00B.jpg" where X is the next letter and the letter you use for calling that image.
FurRiffic (Talk) 08:30, May 5, 2013 (UTC)

Juni, I would like to talk with you a bit in private, so not publicly like here on the wiki.
If you have time could you go on IRC (private channel juni221) and leave a note on my page to confirm you're you?
Sorry if I don't respond immediately, can be AFK at random times, but will try to note that in the topic.
FurRiffic (Talk) 07:52, May 26, 2013 (UTC)

Could you come online again? Got something to show you about the 3d thing we talked about last time.
Same channel, same rules, look at topic for my status.
FurRiffic (Talk) 15:19, June 1, 2013 (UTC)

I was wondering if you might be interested in a spiff of your main page? Specifically I'm looking at adding a picture gallery and some featured videos, as well as fixing the main page for the new fluid layout. I'm also considering removing the recent changes section that's there by default and perhaps truncating the blogs section.

Let me know what you think!

Hello. Sorry for the bother but .. my can you help me with my problem? See, i kinda broke my monadd.exe but idunno how i did it. I can't open it whatever i do and after i broke the .exe file, i can't open any spin-off story i have ... please what do i do ? should i download the file again somewhere ? (but i can't find where i should download it from. I've been searching for days.) or should i download the whole game again ? :((

pls help me i don't want to download the whole game again just for that monadd.exe file :((

I'm assuming none of the admins have been online in the past 4 hours (at the time of this post) but we got a major case of vandalism. Since I don't know whom of the 5 would respond the soonest I'm leaving a note on all 5's talk pages  as well as in case noone picks up the message left by Tf Charge on the main talk page for the wiki.

I'm just going to go off on a guess but you guys can do a mass rollback right? Or should be start cleaning up?

Yo boss, I need your help on dealing with User:Tenchi2k, who frequently spams and badmouths the maker of Monster Girl Quest: NG+. He won't stop spitting nonsense and he keeps ban dodging. Shadowblade777 (talk) 22:20, August 19, 2014 (UTC)

Juni, this is Tenchi. I am not spamming. i am reposting my help requests after Shadowblade777 removes them illegaly. he set a ban illegaly on me. he insults me along with a mod that cheated me out of the efforts i put into his mod. Shadowblade777 refuses to let me post my grevances about him. He persists in abusing his powers. i have seen other ppl get their posts removed by him simply cause he thought it would be funny. If you will please come into the MGQ channel. i have already explained how they have wronged me to ALAKTORN, and he said he would talk with Shadowblade777 but apparently Shadowblade777 is ignoring ALAKTORN. I humbly request you remove this rouge admin untill this dispute is resolved. Thank You.

I didn't want to reply because it'd inflate your stupid attention-seeking ego. First of all, grieving is not allowed; any negatively speaking about any person is harassment and that is against the rules. Ecstasy's actions are completely irrelevant to your ban, and you obviously don't understand this. You've been told to STOP by other people and you didn't, so I administered a three-day ban, but instead of waiting out like a good little boy you continued bitching and whining. Secondly, I only removed your posts, not anyone else's; they were all under you. Thirdly, ALAKTORN never spoke to me. You are not his messenger; if he wanted to talk to me then he would have talked to me directly.
Tenchi, I wouldn't have to ban you if you didn't badmouth anyone. Me, along with many civilians, are requesting you to STOP. Your actions frustrate everyone so PLEASE JUST STOP! Shadowblade777 (talk) 05:27, September 2, 2014 (UTC)

You don't understand. Posting a greivance when your time and effort are in the mod as much as the creators IS ALOWED. Sencei  did 99% of the bug work on part 2, 50% mabe more on part 1, i had every right to post that on the mod fourm.
I don't care if its pissing everyone off right now because You started this by Abusing your powers and Ignoring My Rights. so everyone should be pissed AT YOU.
I WILL NOT STOP. Untill you are Punished or Apologise.

*Sigh* How annoying... Shadowblade777 (talk) 20:49, November 9, 2014 (UTC)
Says the admin that dictates and tells people that work hard on side storys and when the credit for their hard work is ripped from them " you can't tell anyone that you deserv some credit for the hard work cause i said so "
Juni, i worked my butt off for that side Story / Mod. i dident flame or violate any of this wiki's rules at that point. Shadow just up and blamed me when there was trolls highered by ecstasy to harass me off the board cause he dident like people knowing he was lazy and barly did anything besides the story part himself, he did could not even set the fights up properly without my help.

I did not relize Juni the head admin already took a side on this matter. it saddens me to see the head admin doesnt follow the rules. If thats the case i must delcare war on you all now. the unjustice done to me will not be tollerated. pray i never learn where you live or you will be beat into the hospital. i hope both understand you made this personal. you know how passionate i am about this game and its just wrong to take credit away from the people that put much effort into it as i did. I will hurt you, ether of you. thats not a threat its a promise. i Never forget and i Do not Forgive. God might, but i will not. You've been warned now. prepair for my wrath -_-

Hi... Im kinda new to this whole wikia thing and im not even sure you still even work on this stuff, but i was wondering if you were the one that deals with fixing errors in the game?DaiSemper (talk) 05:24, January 17, 2015 (UTC)

Whenever I recieve the Angel Halo sword and defeat an enemy the transition of dots occurs and the creature disappear. This causes the visuals to stop working. In an attempt to fix it I press space to go the next text scene which does not show until I have minimized the game and then unminized it. I continue this process until a Save Location appears where I save the game exit out and then reopen. The game now works until I defeat the next monster. So I continued on like this until I met the Kraken. When she uses Aque Pentagon however, the animation starts but then it freezes at the end. I can not however simply press space minimize then unminimize instead the game crashes. The rest of the game runs fine but it seems animation destroys the running process. If it helps I am using OSX 10.8.5 and am using Winery. If anyone would be willing to help I would greatly appreciate it. I'm not trying to spam sorry I just have a really poor idea of how this website works. I have gone to several sites but all to no avail and I would appreciate if someone could explain to me my problem. I'm really sorry about this.Thanks.00:45, May 21, 2015 (UTC)Folkre (talk)

Is there any website with videos that shows these or the Encyclopedia entries? Jeydo (talk) 09:23, December 28, 2016 (UTC) Dailymotion has taken down a number of them on it's site. Thanks!

Retrieved from "https://monstergirlquest.fandom.com/wiki/User_talk:Juni221?oldid=73811"
Community content is available under CC-BY-SA unless otherwise noted.