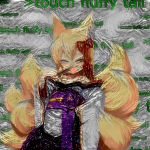 Hi, welcome to MonsterGirlQuest Wiki! Thanks for your edit to the Paradox/Consumables page.

So, what about Universe in conflict, Strike Freedom and Best friends achievement? I don't remember how you get them.Gook (talk) 15:13, September 10, 2016 (UTC)

I think you get Strike Freedom for starting NG+ several times in a row. Not sure about the other two. Fluffisjustice (talk) 16:11, September 10, 2016 (UTC)

Well, best friends seems to be acquired by examining grave in Safaru Ruins with Sylph and Nuruko in party. Universe in Conflict don't know and strike freedom says "Luka, Loyal to himself" and comes after Freedom with is acquired by NG+. Also, is there 3rd tier achievements for fleeing from battle, killing enemies and other things?Gook (talk) 16:24, September 10, 2016 (UTC)

Best friends is probably for looking at the grave with Nuruko. The time I have on that achievement is one minute after the one you get for defeating Gnome and I had Nuruko (but not Sylph) with me there. There probably isn't a third achievement for fleeing, defeating monsters or battling. I have over 500 escapes, 2700 battles and 3400 enemies defeated and have 2, 1 and 2 achivements for those things respectively. Fluffisjustice (talk) 16:40, September 10, 2016 (UTC)

Okay, my friend, we have new things to do. Make main quest page with branches like Main Quest: Looking for the Informant. I'll make locations (already done Pyramid, Third Tartarus and something else). Gook (talk) 17:38, November 12, 2016 (UTC)

Alright. I'll try to write something down but I have some stuff to take care of irl this week, so I can't make any promises. Fluffisjustice (talk) 19:44, November 13, 2016 (UTC)

It seems that original name of witch hunt village is mentioned somewhere. I don't remember where it is, though. Can you check it for me, please? Gook (talk) 20:13, September 25, 2016 (UTC)

Ok, I checked. It's called Magistea Village. The name is used by the soldier who tells you about the shenanigans going on in there after you've cleared Luddite. Fluffisjustice (talk) 14:39, September 26, 2016 (UTC)

Retrieved from "https://monstergirlquest.fandom.com/wiki/User_talk:Fluffisjustice?oldid=73231"
Community content is available under CC-BY-SA unless otherwise noted.