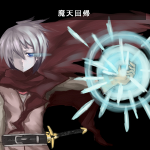 "To record the long forgotten tales of the monster girl era, that is my mission".

Zaphod or Zaphod-sama as he arrogantly refers to himself is a mysterious wikia contributor who dwells in the shadows of the deep internet.

closely observing his fellow monster girl lovers he seems to have make it his own sacred mission to edit and record some of the forgotten tales of the monmusu quest universe.

He seems to dislike users who cannot make the difference between real life and the wiki and often laughs at them from the shadows. Which is ironic because he himself has seemed to lost his way along his travels.

Nothing much is known of his personal life as his very existence is a big question mark.

However all in all he seems to be a pretty cool and nice guy.

Before he became fallen, he was a normal functioning human being with a kind demeanor .

Now twisted and corrupted by the madness of the internet, he has become arrogant, sarcastic, perverted with a little bit of narcissism mixed into it.

He recently became a religious zealot of Ilias.

Retrieved from "https://monstergirlquest.fandom.com/wiki/User:Zaphod-sama?oldid=83398"
Community content is available under CC-BY-SA unless otherwise noted.