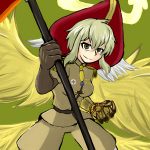 Just an OC of mine:

Formerly a human, he reincarnated into an angel and became Goddess Ilias's right hand after Micaela's fall, granting him control over half of the Heaven's legions (The other half granted to Seraph Eden).

He is also the leader of the eighth order in the hierarchy of angels in which he belongs to, the Archangels.

He has the ability to transform between his angelic form and his past human self at will.

His human form is a normal male student while in his true form he closely resembles a female angel similar to Micaela.

Despite his position he rarely sees action and spends most of his time interacting as a human with the physical world.

He has a deep love for Anime, Manga, Video Games and Music.

He is also interested in Martial Arts, Mythology and anything Supernatural related.

Retrieved from "https://monstergirlquest.fandom.com/wiki/User:Theodos?oldid=83376"
Community content is available under CC-BY-SA unless otherwise noted.