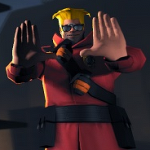 aka Not Jane Doe

There used to be some silly summary of nothing important here related to the title. It's gone now.

A few years ago, this became the first Wiki where I actually did stuff. For example, uploading pictures and starting pages. I started the Pyhar, Diamrem, and Garfunkel pages.

Various Monsters that I like that no one else does (probably)

Favorites (in no particular order)

Primary characters I use:

Luka (wow, what a shock)

The Four Heavenly Bandits! (It's a shame Vanilla doesn't have a page yet when the other bandits do. If I were good at that sort of thing, I'd start a page for her)

The only notable boss I beat was Reaper (Hades version, not Labyrinth of Chaos). I stopped working on them because I don't want to be really overpowered when Part 2 comes out.

Topic is caps because getting this achievement took forever. Took longer than beating Reaper, anyway.

Stuff I Made for Fun

These images were made for a Side Story I was working on that never came into fruition. I don't plan on finishing them, I think at the time I just really wanted to make the images. Fun stuff.
Retrieved from "https://monstergirlquest.fandom.com/wiki/User:SonicBoomSoldier?oldid=76644"
Community content is available under CC-BY-SA unless otherwise noted.