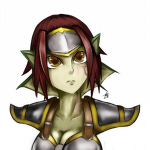 You almost thought I could only blabber in French, eh? Existence and the language of wine, love and croissants are closely entwined, even though I can't claim to be fluid in it. Which only makes you wonder: "Am I fluid in existing?" Most likely not.

I guess you want to know how I met Monster Girl Quest? Or what my favourite artist is and stuff. Let's start this off, shan't we?

I fell in love with MGQ when I started playing it. Of course it had something to do with a small boy being raped by monsters who called him pathetic every chance they got, for I am a sucker for that kind of thing. It also had to do with the way the story is told. You see, perfection is boring, so flaws are what intrigue us in... well, everything. And it's the charms amongst the imperfections that make us love.

This is far from the perfect story-telling experience. The plot is stale, the characters are prisoners of their archetype... if they could be bothered to have a personality to begin with, the combat is boring beyond words, the illusion of freedom is too easily shattered, there is too little variation in the spoken word, a result from the lack of personality, the narration switches between 1st person (story) and 3rd person (battle), which is a deadly sin more horrid than pride and it is written in an engine based on ruby... 'nuff said.

Yet, even with all these flaws, it is a charming little game. The different artists, different styles and so on, give the world a little more depth, even without that having been the reason Toro decided to do so. The characters that are frozen in their archetypes are likeable, well balanced and connect well with Luka, the setting is one that made me giggle because of the sheer opium-level of the one who mused about it, the evolution of the main character is surprising, the end is truly memorable and the voices are husky, get me hot and bothered, which is nice to have in a game centred around making the reader, player, whatever, have shattering orgasms.

Other stuff coming one day when I can be bothered...

Retrieved from "https://monstergirlquest.fandom.com/wiki/User:Granberry_Juice?oldid=48351"
Community content is available under CC-BY-SA unless otherwise noted.