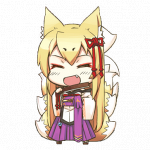 There isn't much to say about me. I'm more of an avid video gamer than anything else. I tend to be a lone wolf and do things on my own and I tend to avoid conversations but that is not to say I completely like to be isolated XD.

For the most part I am friendly although that isn't to say I can be intentionally an ass from time to time although for the most part I tend to do it when it concerns stuff that is common sense or mentioned multiple times. Seriously the lack of critical thinking annoys me at times but bah I am ranting in my introduction more than I am giving info on myself at this point...

Currently I am programming a nscript, for MGQ as a re-patch style mod much like NG+. MGQ : Sealed. On my spare time, for all intents and purposes consider it on hiatus.

Progress on my "Projects"

Please note I am working on Sealed maybe 5-30 hours every few months. This is on the backburner but I will try to start working on this more often.

Retrieved from "https://monstergirlquest.fandom.com/wiki/User:Ginrikuzuma?oldid=69939"
Community content is available under CC-BY-SA unless otherwise noted.