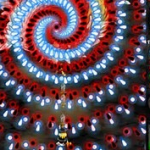 Using 250+ hours in paradox to grind all items and steal everything, all for that perfect 100% completion.

Finally updated my game to the newest translation. Time for a quick speed run...

Now in the LoC, grinding to get my team to max out every job... and getting legendary gear for everyone.

Also here to fill in any Paradox Part 2 monster pages that you guys/gals make, just create the basic outline and Ill fill it in sometime later. Feel free to ask any questions anywhere...

(Nah, but I check in every now and then, usually in the recently changed tab. Of course, my info may be wrong, but Im only human after all.)

Using super appeal and being Luka, Luka draws fire towards him. While not built for defense, he has enough hp and resists to tank maybe one attack from a super boss. With Heavenly Strike and World Ending Slash, Luka's attacks cant miss, but some super bosses (Pretty much only Sun Wukong…) who null physical completely cause him to be swapped out for a better party member.

Saki being Saki, she always has access to Song and Dance skills, allowing her to take Cosmic Taoist for Taoist skills (And Nulling 4 elements!) With Weakening Dance, Dragon Palace Dance, Curse Dance, Strange Dance... basically every dangerous status effect dance in Paradox, she punches holes in any enemy's defense. On the other hand, shes also equipped with the Ribbon and Prevent All Insta Kill, along with a shield that reflects all physical type damage and a permanent 100% magic reflect, making her only weak to auto hit skills (Which every super boss has in spades... oh well.) If she doesn't need to dance, she has white magic (With aqua pentagram) and time magic, but its rare that she uses them.

Despite her race appearing to be a supportive role, it has quite the nice Dex boost compared to the other 2 options. This is good, because Kitsu is built currently to insta gib every mob I encounter in the LoC in one turn. Shes equipped with a legendary ninja sword that allows the Skill Star Burial, a 1800% Dex scaling Ninjutsu that is Auto Hit , with the Terra Chaos Element, which bypasses all elemental reflects/absorbs/resists. With her armor allowing her to always move first, combined with Last Stand, an ability that prevents healing and drops the user to 20% at the start of battle, but grants 50% to all stats (And a 150% to all stats crisis buff due to equipment), Kitsu does 2 - 3 billion damage (Non Crit, non weakness, not buffed,) to all enemies without them being able to do anything. Even up to floor 1000, she could wipe the 10th floor boss without fail, with only the super bosses having enough health to survive a shot.

Edit - After a lucky find, a Ninja Sword with Job Skills Go Twice, Kitsu now can deal 100 billion damage the first turn (Not that she cant do it again the second turn, if at only ~ 40 billion damage), trivializing all encounters even up to floor 2500. Its safe to say she is now my most reliable party member. No one else needs to take a turn, since even if they did, the billions they do is a mere 3 - 4% of Kitsu's first turn. This really helps speeding up farming, as I can mindlessly button mash Z and destroy everything. One of these days (Perhaps after Im finished with part 2) Ill post the total enemies defeated by her, compared to how many she defeated at end of part 2 (But before entering LoC)

Reina would be one of my most best party members if evasion worked, as she has over 100% chance to dodge... but without it, shes reduced to being the one that drains the boss's mana at the start of battle. With white and time magic like Saki, she functions as a back up support that allows Saki and Alice to focus on their unique dances. On the other hand, outside of the LoC she is my BEST party member because of the Harpy Race's unique Thief skills, allowing me to fill out the Monsterpedia easily.

Ah Remi, Rami would make for a better mage, but I like you more. Back when I needed a second healer, you were certainly the best option. Anyway, Remi is equipped with a rod that allows Gamma Blast, a 1800% Magic Scaling Nuclear element black magic. This seems to be the same as Kitsu's, but it costs mana instead of SP, which is bad for clearing trash mobs. Even with 2 mana cost 50%, it costs 150 or so mana of Remi's 412 mana pool. But, unlike Kitsu, Remi has over a million magic to use on the spell itself, along with an accessory that casts it twice! Too bad it takes a while to set up enough buffs, but its worth it in the end against the super bosses that cant be hurt by physical damage.

Oh Lime, the first monster that you get, how far you have gotten... She has the most health of everyone, with 2.5 million health, twice of Luka, who is the second highest. And, due to her armor, she only takes 5% or so damage from physical and magical damage, making her an actual tank. But, as you might have noticed, she has DPS as her secondary, because like all slimes, she gets Divine Destiny, allowing 3 actions a turn. Because she, like everyone on the main team, have learned every job in part 2, she can massively out DPS everyone as soon as turn 3 starts... if the boss hasn't murdered everyone/dispelled by then. She has use of the Skill: Nano Disassembly, another 1800% Atk/Dex Nano Element throwing skill that allows her to actually damage super bosses. Combined with how buffs stack, she might be the party member that can reach damage in the trillions... if the boss survives long enough / Lime doesn't get dispelled or killed .

Alice, instead of being the fearsome Monster Lord, has devolved into a dancer that spams Waning Moon Dance and uses Dullen Rondo to allow 2 actions when she can to help her stack Aqua Pentagram on the main DPS. She's equipped with a shield that starts her off with two deflectors, and has a chance to regen a deflector at the end of turn, allowing her to focus on keeping other members alive after a wipe.

Not used for anything, except for reviving people at the end of battle (And an offering to the super boss to proc holy martyr). Attempting to make her useful, but I haven't found any good legendary gear that suits her yet.

An attempt at making another Kitsu, but alas, the gear I have gotten so far isn't good enough yet. She does rather good damage, but compared to Kitsu's billions, a mere 250 million (X4) is no where good enough.

Another attempt at making a DPS character. So far, Hild is the only character that has their custom legendary weapon, a Chaos weapon that allows the use two good on paper skills: A Makina skill that hits 5 times for 500% Dex, and an artificial skill that does 1800% Dex and boosts dex. Even with an accessory that triples Makina Skills, every hit only does 5 million, meaning a total of only 75 million... perhaps its because I haven't gotten any other good gear for her yet. Still, she can still use Daisy Bell, so she stays.

Pretty much a Remi without the damage to back it up, due to insufficient legendary gear. Currently resigned to carrying weapons that boost gold drop rate by 500% and item drop rate by 300%.

Now Alicetroemeria… she actually has a nice set of gear built for one purpose: dropping as many meteors as she can! A rod that boosts time magic and meteor damage, and an accessory that drops a meteor 75% of the time every start of turn and end of turn that hits twice due to Alicetromeria's passive. On the other hand, it only does 100 million or so unbuffed, so until I can find some other good gear, Alicetroemeria sits in the back line again.

So I don't need to pull up a random page every time...

Retrieved from "https://monstergirlquest.fandom.com/wiki/User:Gamessmasher?oldid=89233"
Community content is available under CC-BY-SA unless otherwise noted.