Tsukuyomi is one of the Next Dolls created by Promestein. She was specifically built to defeat Tamamo, having being built from her cellular structure and naturally inherited her deadly magic and earth abilities, giving her massive physical strength in addition to sheer defense. Her body is also lined with anti-magic charms to ward off magical abilities. Although she is slow, that weakness is mostly irrelevant due to her overwhelming power.

After Ilias declares war and Promestein lays siege on the Monster Lord’s Castle, the scientist presents Tsukuyomi, who mentions that tonight is a full moon.

Tsukuyomi looks on as the battle progresses. However, after Tamamo forces Promestein to order a retreat by scaring the lesser chimeras, Tsukuyomi is extremely dismayed and ashamed, unable to fulfill her purpose in defeating the Heavenly Knight she was created to neutralize.

After Luka averts the crisis in Plansect Village, Tsukuyomi is revealed to be the mastermind behind the turmoil, having used brainwashing magic inherited from Tamamo to command Queen Alraune to have the village kill itself through an internal war. However, due to Alra Priestess refusing to follow her predecessor, the plan went astray. Tsukuyomi laments the plan's failure and decides to kill everyone on her own accord, which she finds "boring." Queen Alraune tries to attack, but Tsukuyomi applies the earth to instantly blow off the attacking vines and delivers a fatal punch that causes Queen Alraune to collapse. The chimera then taunts Alra Priestess to use the opportunity to kill Queen Alraune and take her seat, but is interrupted when Queen Alraune traps Tsukuyomi in a flower and administers Aztec Rose, the deadliest poison known in the world that instantly kills off cells. However, due to Queen Alraune's weakened state, the act of synthesizing the poison would kill her. Prepared to die for her brethren, Queen Alraune completes refining the poison and uses it on her foe. Despite Queen Alraune's sacrifice, Tsukuyomi reveals herself to be still alive; albeit stuttering and spasming repeatedly due to Aztec Rose's effects. The chimera then collapses, and with a loud thud, she vanishes.

Tsukuyomi retreats to the Drain Lab and apologizes to her creator, still spasming. Promestein is impressed with the Aztec Rose's effects and feels that she should not have overlooked it.

When the Four Heavenly Knights press forward to the Four Towers, a repaired Tsukuyomi ambushes her counterpart. Tamamo struggles and Tsukuyomi gloats until the kitsune mentions about Promestein rebelling against Ilias and the Next Dolls were actually created for that purpose, having read the data from her discs. Tamamo states that this is just her enemies repeating the mistakes during the Great Monster Wars, then commends her counterpart before moving in to finish her; Tsukuyomi assumes she's bluffing until she uses Word of Dispel, revealing her true form as a member of the Six Ancestors. Tsukuyomi realizes that she is truly a sacrificial pawn of Promestein before being completely annihilated by Tamamo's fire attack, with no trace of the chimera left.

"A Next Doll, one of the strongest Chimeric Monsters created by Promestein. Made from genetic material gathered from hair collected from one of Tamamo's fluffy tails. After the base clone was made, various mechanical upgrades were made to increase her performance.

To be able to contain the incredible strength of the earth imbued in Tamamo, her body had to be focused on defense. To protect against Tamamo's magic, anti-magic charms and devices were installed throughout her body. Able to use power of the earth and Kitsune magic, she is powerful all around. She suffers from some speed performance due to all the heavy armor, but it isn't much of an issue."

Tsukuyomi is fought by Tamamo, not Luka. After lowering Tsukuyomi's health by a third, Tamamo gains the ability to use Word of Dispel and obliterate her chimera counterpart.

If Tamamo is defeated, Tsukuyomi leaves to rape Luka using her vagina until he dies.

"That damn fox... Did she send you here just to harass us both? The difference in power is clear... But that damn fox is holding a trump card. Perhaps if she just lowers the enemy`s HP a bit... Now go, oh brave Luka. Kill that wicked fox later on, too." 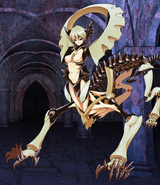 Tsukuyomi in the Monster Lord Castle.