The closure of this wiki has been postponed to allow more time for a move to a new host. The new closure date is Dec 13.

View source
watch 02:17
New Pokemon Games - The Loop
Do you like this video?
Play Sound

The Suck Vore is one of Lily’s failed experiments stationed at the Witch Hunt Village, encountered in Chapter 1 of Monster Girl Quest. It hangs from the ceiling like an over-sized tentacled sex organ and literally just captures men to feed on their fluids. Created from rejects of Lily’s experiments, the original girls morph into the creature, losing their intelligence and memories until sealed.

Upon chasing Lily into her dungeon, Luka finds many Suck Vores hanging from the ceiling, most with men already in their grasp. A young human girl then appears before Luka, begging for help. Appearing out of nowhere, Lily uses some unknown stimulus to transform the girl before his eyes. Lily remarks that the creature is yet another failure, but uses the chance to escape while the creature battles Luka. After he defeats it, the Suck Vore turns back into the girl with no problems to be seen.

“A low grade organism created from a female villager by Lily's experiments. Her intelligence and reason has been completely erased and the Suck Vore's only function is to catch men and suck out their semen. It isn't even capable of reproduction. When it catches a man, it draws it into it's body and uses it's tentacles to force him to ejaculate. Due to the large amount of slimy tentacles, it's able to force a man to orgasm surprisingly quick. As soon as he ejaculates, the Suck Vore can absorb the semen through it's flesh.

Once it catches a man, it will continue to suck out his semen until he dies. Since it's unable to think or communicate, there is no escape once caught, making this a very dangerous monster. This was one of the first creations of Lily.”

*Tentacle Restraint: Triggers bind status and leads to Full Body Energy Suck or Genital Energy Suck on the next turn.

Sylph is recommended to be used to avoid getting into a bind. The bind isn't too hard to break out of and neither Full Body Energy Suck or Genital Energy Suck will lead to one-hit KO, plus both only happen on the turn after Tentacle Restraint. However, in a bind the attacks will hit twice and the draining effect will make the battle a bit longer.

Once Luka succumbs to an empty HP bar, the Suck Vore will wrap it's tentacles around him (or keep hold of him if the battle ended in a bind) sucking away at his energy and ejaculations before enveloping his whole body to finish the job.

“Were you satisfied being sucked by even a strange creature like that? You're quite the miserable pervert. The Suck Vore has a troublesome restraint attack. Not only is it damaging, but it heals her too. You may want to call Sylph to mitigate some damage. Along the way, try to use your SP on strong offensive skills. But you may need to save enough to recover once or twice… It seems as though your SP may be spread a bit thin… But if you adapt to the situation and do your best, you should be fine. Now go, oh brave Luka. Bring your justice to the woman who's a plague on her own village.” 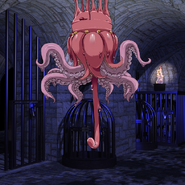 A human girl before Lily turned her into a Suck Vore.

The human girl gradually turning into a Suck Vore.

Just evolution of the species… 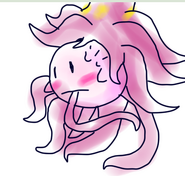