With the Ball of Guidance one can venture to this beautiful hidden treasure of the sea. Living down here are Seaweed Girls, Jellyfish Girls, Sea Anemone Girls, and Anglerfish Girls.

Luka arrives here as he investigates the rumors of disappeared mermaids and fishermen, and hopes to learn more from Kraken, the queen of the Southern Seas. As he progresses, he sees captured mermaids that Meia is the one responsible for imprisonning them. When he arrives at the deepest part of the temple, Meia is indeed sitting on the throne instead of Kraken while surrounded by a harem of young boys. Once it's clear that she's lost her mind, the party beats her down.

When her sanity returns, she explains that she came to the temple to deliver her marriage pledge to Kraken. Instead, she was met with Astaroth who instead gave her the sealed queen, and who proceeded to brainwash Meia to tell her to do what she desires the most as she's now the new queen of the Southern Sea. 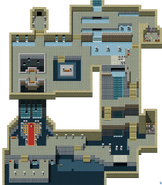