Club
None
Cotton Robe
None

Can always equip Clubs and Staves.

Can always use Club skills/White Magic, dealing and healing +30% damage and HP.

Club skills and White Magic use Will and Atk respectively.

Sex Toy Use (0 Affection) (Must be equipped with a sex toy, scene changes based on what sex toy is equipped.)

Sonya is one of the main characters of Monster Girl Quest: Paradox. She is Karen`s daughter and Luka`s childhood friend. She is quite childish, getting excited over adventures but easily frightened although she is capable of being serious when the situation calls for it.

Sonya will join as soon as you talk to the chief and leave his house. However, you can leave Iliasville without talking to the chief to not recruit her. In doing so you will not obtain the Pocket Castle, which also means you will not be able to recruit any random monsters at all. Sonya will then join near the end of part two, right before the Snow Cave, having been brought there by the White Rabbit.

Sonya is first met on the way to Luka's baptism. She was tired of waiting for Luka who was running late and went to find him. They proceed to Luka's baptism where she assists the head priest. Ilias appears surprising everyone present. Sonya runs off but quickly returns to tell Luka two little girls are fighting in his inn. After Luka ends the squabble and says his good byes to village elder, he meet Sonya waiting outside the chief's house. She forces her way into the party, not wanting to be left out of an adventure or risk letting Luka get hurt by going off on his own.

Before they can leave the village, Nero shows and starts talking to Luka. During the conversation, Sonya notices Nero has been staring at her and she asks why. He apologizes and asks for her name but when she introduces herself as Luka's childhood friend, he blurts out Luka doesn't have one. She gets upset causing Nero to apologize and leave.

After that weird conversation, Sonya tells Luka about how there is a Slime Girl in trouble. Luka asks whether or not that is her job to deal with which she shrugs off.

Sonya and the gang rested on a camp before going to Iliasburg and she remembered the time she got lost with two Slime Girls on a mountain. After Sonya returns to the camp, she is somehow being talked about and wants to know what Luka and Ilias were talking about.

After hearing rumors of Amira disappearing she helps defeat the 4 Heavenly Bandits them but her expectations were blown away when she finds out the bandits are actually kids, she feels bad for stopping them and later apologized to the town folks. Before leaving for the Nameless Slums if Luka decides to bring Papi with her Sonya is impressed with her work in the Blacksmith.

Sonya helps Luka meet up with the merchant they rescued on Talus Hill after getting the merchant licence and with Vanilla's stock market. Upon hearing there is a big beetle Luka and Sonya goes to find a big beetle for Vanilla.

When they arrive at a ruined castle Alice/Ilias calls this the Mithra Sealed  Castle. Sonya is amazed on the structure of the building. Alice/Ilias explained the history behind this castle and the weapons used in the Great Monsters War. Sonya believes that Ilias created the Dark Goddess but Ilias doesn't want to hear any more of it.

Sonya gets psyched later on investigating the business with Phoenix Feathers and Don Dahlia at Nameless Slums, she and the gang uncovered the secret of Don Dahlia's business. She gets ripped off by a merchant selling fake phoenix tails and received weeds instead. She and the party fights the Phoenix Girl and later recruited the Phoenix Girl Mini as Don Dahlia only kept her for her business while lying to her.

Sonya later surprisingly turned into an Aptosis while trying to intervene in the fight of the Lilith sisters and Eden alongside with Gnosis and Zion and try to destroy the parallel world that she is in and she called for Adramalech for back-up but she proved to revive no matter how many times she was taken down so Luka fights his own friend Sonya Chaos.

On Alice route she will be stopped and kept under watch of Morrigan due to her sister's request but Luka doesn't want her in his party.

On Ilias route she will use her powers to make a doppelganger of her and stop Adramalech causing time to go back just before Sonya defeats Adramelech.

Luka has some flashes of Sonya being an Aptosis after the fight and Sonya ask why is he shouting her name.

Sonya: “I can't stand house-sitting. Hey Luka, hurry up and take me with you!”

Sonya: “You want to eat an apple? Just wait a minute; I'll cut it up.”

Luka: “Sonya, you can understand Nuruko?”

Sonya: “You can't understand her, Luka? From the sound of her voice, it's obvious she wants an apple.”

Sonya: “No fish. You've been eating too many lately. You need balanced nutrition, got it?”

Sonya: “We're friends, Radio. You can just call me Sonya.”

Radio: “Then please CAll me a piece of junk. That's what my beST friend used to call me...”

Sonya: “Were they really your friend...?”

Spider Princess: “Oh, you're quite the nuisance. Are you still buzzing around my betrothed...?”

Sonya: “Apart from that, I've been curious... Isn't “betrothed“ the word you use for a woman's husband?”

Spider Princess: “I'm old-fashioned, so that's what I call him. It's not a very narrow-minded thing to say.”

Luka: “Because you've been hiding that you were the Don of the mafia all this time... Frankly, you're reaping what you've sown.”

Lazarus: “It's none of your business...”

[If both Nuruko and Gnome are recruited]

Lazarus: “What the hell's with you girls?! You really shouldn't get involved!”

Sonya: “When you joined up with Uncle Lazarus, you weren't doing anything bad were you...?”

Merlin: “To rule over evil is not necessarily evil in itself. Rather, you should think of it as restraining and controlling evil?”

Sonya: “Don't admit it so readily... An old man can't support himself.”

Merlin: “I represent the Don. I won't be troubled so easily with surviving.”

Sara: “Oh, Sonya. Have you had the rice in the dining room?”

Sonya: “Yup! I had it in their new dish, the salmon bowl.”

Luka: “Sonya, Sara, you two seem to get along.”

Sonya: “There weren't any girls my age in the village. She's like the friend I never had.”

Sara: “The same goes for me. I guess you could say we're girlfriends.”

Sonya: “Umm, is this really okay? You're out on an adventure even though you're a queen...”

Queen of Grand Noah: “Meda-- ...Ensuring the safety of the world is part of a ruler's duties. To that end, it is appropriate for me to be willing to go on a long journey.”

Sonya: “I wonder how uncle Lazarus is doing? I should write him a letter.”

Sonya begins to write a letter.

Sonya is practicing swinging her weapon...

Sonya aimlessly flails their weapon around!

Enemy gets hit by accident!

Sonya: “Stop it, all of you! It's not a competition for me!”

Sonya tries to stop the fight!

But no one is listening...

Sonya: “Hmmm, I wonder if my breasts have gotten bigger?”

Sonya was trying to appeal to somebody...

But no one was looking!

Sonya: Your cooking was as great as usual. Running an inn by yourself really paid off there. You won't have any problem finding a wife with skills like these...

Sonya: Tch..!. So anyway.. Your big adventure is finally here. I never thought you'd be some chosen hero trying to save the world.

Sonya: Hey Luka, you remember that time we got lost in the mountains? We were still kids and went off the trail... You came and found me before anyone else

Sonya: I got lost following after you! You made it back to the vilage no problem!

Sonya: There's no need to apologize. It was my fault I got lost in the first place...  Tonight reminded me of that night. Just the two of us, alone under the stars. Luka and I.

Sonya: That's when i decided I'd accompany you. Letting you go off on adventure alone would be rash and dangerous.

Sonya is the only character that has unique ability to understand Nuruko's language and the only one who can translate it for others.

Sonya in 2nd Paradox PV
Add a photo to this gallery 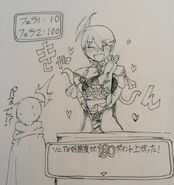 Drawn by Setouchi.
Add a photo to this gallery
Retrieved from "https://monstergirlquest.fandom.com/wiki/Sonya?oldid=100782"
Community content is available under CC-BY-SA unless otherwise noted.