Snow Shrine is a location in Monster Girl Quest: Paradox

Isolated in the bottom right part of the Snow Continent, the Snow Shrine lies. Cupid and Valkyrie patrol here, watching out for any intruders. Uranus and Eliciel also wander in search of people to perform judgment on. Seraph Eden is praying in the innermost part of the Snow Shrine to try to keep whatever wants to escape Ilias Temple Ruins sealed inside the place.

On Ilias route, the small goddess manages to convince Eden to open up the barrier and to join them after implicitly threatening her. Eden then let slip that the Hall of Creation is still standing, and Ilias suggests bringing back Micaela and Lucifina to life, something that doesn't please the third seraph.

On Alice route, Eden gets furious at the party when they ask them to remove the barrier and attacks the group. Once she's calmed down by beating her, Luka tells her that he's the son of Lucifina, and Eden asks if he's come back to make a pilgrimage to ask for the forgiveness of the goddess. Alice tells him to roll with it, and Eden finally opens up the barrier.

This place gets revisited during the Collaboration Scenario. When the party is investigating the disappearance of Musette, Bell and Lyla, they learn from Ranael back in Snow Heaven that strange angels had been sighted near the shrine. When the party arrives her, they're blocked by a barrier and met with Daimyokai who stole a large amount of relics from everyone, including the "Immortal Trashing Whip", a weapon used by Saja in the past to kill angels. Still, the yokai hunter gets taken down by the party and gets forcibly recruited to Magatsu's displeasure. The party then faces Musette and her followers in the entrance of the shrine, and after successfully beating them, integrate them into the party as it's the only way to contain them.

Outside of the Snow Shrine 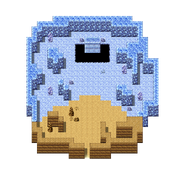