Seraph Eden is in the first order of the Hierarchy of Angels and is thus the leader of the entire angel army and is Goddess Ilias’ right-hand.

Eden is obsessively loyal to Ilias, always obeying her will and never thinking to betray her. She distrusts Promestein, a lower ranking angel with her own motives, and Black Alice, the 8th Monster Lord. However, she grudgingly works with them on Ilias' orders.

Eden absolutely hates being called the “Third Great Seraph", "Third" or anything that seems to imply such, since Micaela and Lucifina became fallen seraphs and departed and thus Eden considers herself above her predecessors.

Eden is first mentioned during the siege of the Monster Lord’s Castle, having sent Archangel Ariel to assist. However, after the Archangel is defeated, Promestein calls Eden a failure. Luka can’t help but wonder who Promestein is talking to, but she doesn't say.

After Promestein retreats, Eden urges Ilias to punish her, but Ilias decides to let it go, much to Eden’s dismay.

While Luka rests in Enrika, Archangel Mariel reports that the invasion is going as planned, and Cupid reports of Promestein’s Drain Lab. After Mariel accidentally calls Eden the “Third Great Seraph” and leaves, Eden angrily declares that she is the First.

As Luka travels from Natalia to Safina, Promestein calls Eden a failure again. Eden complains that it’s the chimeras at fault, and Promestein admits she needs to research more about it. Eden then proclaims her distrust of her, and that she has her eyes on the scientist. Promestein just says (sarcastically) that she’s a devoted follower of Ilias.

Once Luka has gotten Sylph back an goes onward to Noah, Eden is shown talking to Black Alice about her failure, though she retorts that it's simply a small step to progress. Despite that, they believe that they have won the war, the only remaining obstacle is Luka’s defeat. Eden then says that she does not trust Black Alice and is keeping an eye on her and leaves; Black Alice responds that if she doesn’t trust someone, she should deal with them immediately, showing Eden’s incompetence.

As Luka advances from Noah to Gold regions, Promestein calls Eden a failure when Throne Eggiel fails to provide enough cover for Amphisbaena to defeat Erubetie. Promestein then informs her followers that they can simply ignore Eden as they continue their plan due to her uselessness. Cupid overhears her saying "bad things" about Eden and leaves to report.

As Luka makes his way back to the Monster Lord's Castle from Gold, Promestein and Black Alice insult Eden, calling her “useless”, “incompetent”, “fool”, “obtuse”, and “third” and tell her that Ilias would be angry for her four failures. Eden tries to shout back, stating that Promestein and Black Alice also failed, though they retort that it's still the commander’s fault. Promestein then leaves, sarcastically saying she wouldn’t want to trouble the seraph and receive a grudge. Black Alice then wonders about inviting Ilias to their “tea party” before Cupid arrives to deliver a report and Black Alice takes her leave. Eden angrily scowls at her departed comrades.

Eden appears to welcome Luka and introduces herself as the highest ranking angel, but Luka see the discord in her heart. This immediately angers Eden, causing her to drop her calm facade and accuses him of taunting her, and transforms. Luka falters against Eden's onslaught until Alice arrives and blows off Eden's tentacles. With the Hero and Monster Lord fighting together, Eden is vanquished and sealed, disbelieving in her defeat and her inferiority to Lucifina before vanishing.

“The highest and only member of the Seraphim class of angels. Effectively Ilias’ second in command, she is in charge of all other angels. Completely loyal to Ilias, she will obey any command given, no matter what. Due to her extreme faith, she cannot tolerate anything negative said against Ilias.

Her true form is in fact an enormous garden of paradise. Her female figure is only a small showing of her power. If she unveils her entire body, she was powerful equivalent to that found in an entire continent on the surface world.

There have only ever been three Seraphs: Lucifina, Micaela, and Eden. It’s said that Ilias herself ordered Eden to turn her body into a garden of paradise for the Heavens.”

Garden of Eden: Triggers bind status and leads to a one-hit KO via instant follow-up. Requires Sylph to avoid.

This fight is not very hard, but she will attack three times in a row which can do some hefty damage. Use the Four Spirits and go on the offensive and she should go down very quickly. When her health reduced to the halfway mark, Alice joins the fight and will aid Luka by using basic attacks, Omega Blaze, Frost Ozma, and Monster Lord’s Cruelty.

“Even my trusted confidant turned into something horrible… Her appearance itself is a sin. Wielding great strength and magic, each of Eden’s attacks can bring about instant death. You will need both evasion and defence to have any hope of surviving. So be ready to challenge her using all of the spirits. Also, if you lose to a certain attack, a different horrible fate awaits. Now go, oh brave Luka. Correct that foolish angel with your blade of divine justice.” 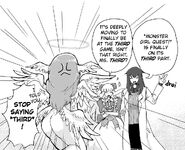 Eden in Beyond the End by Setouchi.

Eden killing some ants by Setouchi

Eden got some gastric medicines as a present by Delphinus 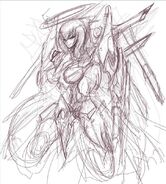