Sara is the current princess of the Sabasa kingdom in Monster Girl Quest. Being a descendant of the legendary Sphinx, she bears the bloodline of a powerful monster, though it has been diluted over the passing generations.

A few years ago, Sara was attacked by a Scorpion Girl. She was saved by Granberia and fell in love with the Heavenly Knight, leading her to try her hardest to become her wife.

When Luka first arrives in Sabasa, the Sabasa King claims that the princess (whom he does not specifically name) was kidnapped and a note with “horrible hate-filled” writing was left, saying that she was taken to the Pyramid. The king also pressures Luka into marrying his daughter, but each time he turns it down.

Luka heads to the Pyramid and finds a female knight attempting to take the Pyramid's Dragon Seal Trial, introducing herself as Sara. Unbeknownst to Luka, the knight is actually the princess. Luka agrees to venture with her into the Pyramid, however while she is particularly weak, the monsters inside seem more intent on defeating Luka first.

Fending off the Mummy Girl, Cobra Girl, and Nefertiti Lamias, she reveals to Luka her love for Granberia. By law, a human must have taken the Dragon Seal Trial to become a dragon’s husband/wife. It is for this reason that Sara desires to become strong; in order to meet Granberia’s expectations, and is a bit envious on Luka’s strength.

At Sphinx’s room, the two answer her questions. Sara answers the last question, “Why are you taking this trial?”, responding with “For the one I love”. As Sphinx casts her sad gaze, she reveals the purpose of the trial is to wed human and monster and explains she had loved the first Sabasa King, and when he passed away, she designed the Dragon Seal Trial; Sara and Luka promise to remember Sphinx’s tragic story. Having completed the trial, a dragon marking is engraved on Luka’s and Sara’s hand as proof. Luka then asks about a kidnapped princess, and the female knight reveals to be Sara. Sphinx then sees her lover’s burning fire in her descendant’s eyes and notes her actions were not in vain before vanishing.

The next morning, the two part ways. Alice mentions that the king was aware of Sara's intentions, having asked if she was any trouble.

Upon returning to Sabasa after hearing a guard in Gold Port mention Sara’s kidnapping yet again, the king reveals that she was indeed kidnapped this time, by elves and fairies. The conditions for her release involve the entire human population of Sabasa pulling up stakes and leaving for good, which are naturally unacceptable. Luka then sets out to a remote island to the west, where Sara is being held.

Heading to their base of operations, the Queen Fairy and Queen Elf reveal to be working together; Sabasa was originally a monster territory, however they were pushed further away from their homes as the generations passed. Being pacifists, they refused to fight, however enough is enough, and it’s time to strike back; not by holding the princess for ransom, but by turning her into a monster and then sending her to do the same to the rest of Sabasa’s nobility. They know it’s a foolish idea, but they don’t have any other options.

Having defeated both queens, the ground shakes; their attempt at transforming Sara has actually caused her own monster blood (from Sphinx) to awake, transforming her into something much more powerful than they’d expected. The demonic succubus version of Sara arises, and attacks Luka, but he manages to hold out and revert her back to normal.

The Queen Elf seems ready to listen, until she pulls a knife towards Sara. Granberia then drops in and attempts to execute the Queen Elf for having disobeyed the Monster Lord’s laws, but Sara steps in on the Queen Elf’s behalf, stating that the Monster Lord would disapprove her subordinates fighting each other. Sara and Luka agree to find a resolution for the Elves and Fairies to coexist with humans. As Granberia tries to leave, Sara runs at her and is accidentally transported along with Granberia.

Returning to Sabasa, Luka informs the king what happened. He had been aware of his daughter’s intentions all this time, and doesn’t mind the next generation not being ruled by her. Luka promises that he’ll bring back Sara in one piece, but the King requests to let her daughter do as she pleases.

Alternatively, Luka can lie and state Granberia had appeared to kidnap Sara. However, while the king appears shocked, he seemingly sees through Luka's lie, prompting him to leave.

Although Luka doesn't specifically meet Sara in the at the end of Chapter 2, he tells her father in Chapter 3 that it would be the best place for her, as the whole world is under siege by Goddess Ilias.

After going through the whole world to avert the crisis and then planning out a strategy meeting with all the rulers, Sara appears as a maid at the Monster Lord's Castle, but runs away when she sees her father appearing for the meeting. After the meeting, the King interrogates her where Sara reveals that the citizens of the castle have taught her how to control her monster blood.

One month after Ilias's defeat, Sara has learned to teleport and uses it to travel between Sabasa and the Monster Lord's Castle, continuing to serve as a princess and Granberia's maid, respectively.

If Luka accepts the Sabasa King's marriage proposal with Sara, Luka is forced to undergo the wedding ceremony, with Sara not minding being his wife. She then eagerly jumps him and uses her succubus vagina, raping him every day and night and draining him to the point where he can't even lift a finger, resulting in her bad end.

“The Princess of Sabasa, she’s the current heir to the throne. She’s a descendant of Sphinx but the monster blood has slowly thinned out over the years. Though she’s slightly stronger and more intelligent than a normal human, she behaves like a normal human. Even though she’s an entry in the [Monster Encyclopedia], there’s no doubt she’s almost fully human.

Though she’s intelligent, she acts before thinking things through. After she fell in love with Granberia, she devoted herself to swordplay under the guise of training for self-defense. Though she’s a decent swordswoman for a human, she is still no match for the monsters that live in the desert.

Sara has also undergone extensive training to behave and act like a lady of the Royal Family, which includes manners, history, and sexual skills. All of her knowledge has been learned from books and seems to have never been practiced on an actual man before.”

“The princess of Sabasa, after being corrupted by the Queen Elf’s magic power. In addition to the power of a Succubus, she also awoke the Sphinx’s blood that still ran through her veins. Due to that combination, her power even surpasses the Queen Elf’s.

Her human memory has all remained, but her thoughts and desires have become confused due to the sudden drastic increase in power. Overcome by her own desires, she has turned into an incredibly dangerous monster. At the mere sight of a man, the desire to drain him dry takes over her human thoughts.

After enough time has passed, it’s expected that her mind would have slowly returned to normal as she got used to controlling her power. But before that would happen, the amount of men drained dry would have reached enormous numbers.”

First, use the Undine + Serene Demon Sword combo, then Gnome + Sylph + Earth Rumbling Decapitation until she goes down. Meditation may be necessary.

“Did you enjoy Sara's vagina now that she's a Succubus? ...Sheesh, what reason did you set out on an adventure for, anyway? Is your quest to make sure you're raped by every girl you come across? Sara has two types of restriction moves that will both defeat you right away if you don't break free with Gnome. She uses a trance ability, but Sylph's evasion isn't guaranteed. Sara has high offensive power, so any defensive help would be useful, though. Since Sara deals a lot of damage and you have both spirits active, a long fight may be unavoidable as you spend most of your SP on recovery. Lastly, Sara may decide to alter your fate a little bit if she defeats you with two certain moves. Don't disgrace me by finding out which two, though. ...Heed my warning for once. Now go, oh brave Luka. Show no mercy to a monster, even if they used to be human.” 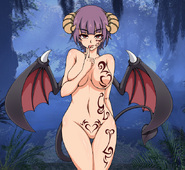 Sara as a succubus due to the runaway monster power of Queen Elf's ritual and her own monster blood.

Sara as a maid meeting her father at the Monster Lord's Castle.

By UN DO
Community content is available under CC-BY-SA unless otherwise noted.