Peter the Fourteenth (ペテロ14世 Petero juuyonsei) is the San Ilia King (サン・イリア王 ,San Iria Ō?) and the ruler of San Ilia. An old, “wise” man, he has high praise and respect for Goddess Ilias, only accepting heroes who have received her blessings to meet him (although Luka was an exception).

Before Luka’s arrival, Ilias came to the San Ilia King in a dream: she told him that he would meet an unbaptized hero named Luka and he would guide him.

Moments after Luka signs up to gain audience with the king, the guardsman captain brings him to meet with the King. The King asks if Luka is baptized.

If Luka lies, the King's face becomes scornful; Luka then comes up with another lie to cover the first one, stating that he was mentally baptized.

If Luka responds truthfully, the King is shocked and reveals that Ilias told him he would meet the unbaptized Luka.

Regardless of Luka’s response, the King then decides his path: he would meet three wise sages and give them the Jewel of Friendship, Jewel of Fortune and Jewel of Victory that Luka has to find in order to complete their trials and obtain the Hero’s Proof. Only then would Luka receive a seemingly divine weapon known as the Goddess Sword, said to make all monsters, including the Monster Lord, bow before it. However, Alice does not kneel, and annoyed due to the King’s blasphemy, she shatters the Goddess Sword. She instead tells Luka to recruit the Four Spirits and obtain their power. The King then becomes catatonic; the captain guardsman returns to check on the King and upon finding him in this state, asks Luka what happened.

If Luka lies, he states he doesn’t know what happened. Alice fills in and tells the guardsman that the Monster Lord came and destroyed the Goddess Sword.

If Luka responds truthfully, he states the half-truth: the Monster Lord broke the sword.

Either way, the guards are on high alert as Luka and Alice leave the Audience Hall.

When the ghosts of the Haunted Manor arrive in San Ilia, the King is possessed by two of them.

When Fairies from the Forest of Spirits arrive, the captain guardsman informs Luka that the King has been cured of his trauma, although he has no recollection of the events. When Luka enters, the two ghosts still remain. Luka points out that his crown has been replaced with a jar, and two fairies giggle.

The King reads a book to a pair of Fairies, indicating that his faith in Ilias has already waned. Just then, a soldier interrupts and reports a massive wave of unknown insect-type monsters approaching the castle. One of the fairies recognizes it to be similar to the Chimera Dryad.

During the siege on San Ilia Castle, the King's energy is absorbed by a Catoblepas Girl, but the ghosts and fairies clinging to him immediately revitalize him. After Luka arrives, defeats the Catoblepas Girl, and consults the King, he is depressed for Ilias had abandoned him and now the martyr priests are waiting for Ilias' messengers of doom to kill them. Luka manages to convince the king to completely give up his faith in Ilias, and then goes to deal with the priests. After Luka defeats Power Muzukiel, the San Ilia King preaches to the priests and successfully convinces them to give up their ways. Before Luka and Alice leave, the King wishes them well.

Once everything is dealt with across the world, the San Ilia King, along with the other human rulers and monster queens, are summoned to the Monster Lord’s Castle to discuss a strategy meeting. After the meeting he can be found in the castle library, exclaiming excitedly over the trove of tomes thought to be lost. He also has an interaction with the Queen Fairy who appears pleased with his treatment of the fairies. 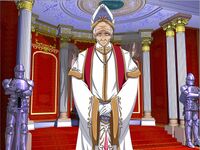 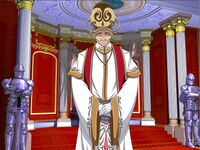 San Ilia King with ghosts and a flowerpot as a crown.

By UN DO
Community content is available under CC-BY-SA unless otherwise noted.