One of the chimeras and the Next Dolls, Rapunzel was created by Promestein. Unlike her sisters, she is not designed to counter any Heavenly Knight, rather she is specialized for reproduction; and thus the creation of Next Dolls.

She first appears during the onslaught of the Monster Lord’s Castle. The invasion however, ends when Promestein orders a withdrawal after sealing Alice and stripping Luka of his Four Spirits.

Rapunzel appears again during the joint Angel and Chimera attack on Enrika. Luka knows that he doesn't stand a chance in his current state, but fortunately enough; Micaela intervenes immediately. Rapunzel recognizes the fallen angel, and after sensing Micaela's immense, cold aura a brief standoff insues. However, Rapunzel backs down and orders a complete retreat. However, Micaeala reveals that she was merely bluffing as her powers have waned over time.

When Luka presses to the Navel of the World to reach Heaven, the Four Heavenly Knights alter the Four Towers to weaken the holy energy throughout the world while defeating their Next Doll counterparts in order to gain access to Heaven. Rapunzel arrives too late, just as the spirits regain their full power, and Luka swiftly defeats the Next Doll before him.

"A Next Doll, one of the strongest Chimeric Monsters created by Promestein. She wasn't created to counter any particular Heavenly Knight, but was used as a birthing tool for their creations.

She was created focusing on her reproductive potential, in order to birth the other more specialized Next Dolls. Referred to as the "Egg Machine", her personality itself slowly came to embrace that role and function.

Despite being specialized for reproduction, she was given superior abilities and genes in order to pass them down to the other Next Dolls. Though she doesn't focus in any one element or specialization like the other Next Dolls, she is very well rounded. Since she has no real weakness, she is the most adaptable of the Next Dolls."

*Lewd Bug's Restraint: Triggers bind status and leads to Lewd Bug's Mating. Requires Gnome to escape. Not escapable if Gnomaren is summoned, but Sylph can help to avoid.

With all the Four Spirits working at full power again, summon them immediately. Their effects will counter all of Rapunzel's attacks, so there is no real threat coming from her. Proceed with the offensive afterward and she should go down.

If Luka loses, Rapunzel forcibly rapes him with her vagina until he dies.

"Mating with an artificial monster this time... I wouldn't be surprised to see you mate with stray dogs you find now... Starting with this fight, you can unlock the true power of the spirits. With them usable, this shouldn't be a hard fight. Your evasion and defense will both be sky high... Since you can stack them on top of each other, you aren't bound by picking a good one for each situation any longer. Now go, oh brave Luka. Once you're tired of mating with everything you see, how about trying to save the world?" 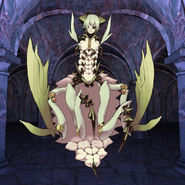 Rapunzel in the Monster Lord Castle.

Close-up of Rapunzel.
Community content is available under CC-BY-SA unless otherwise noted.