Principality Nagael (権天使ナガエル, Kentenshi Nagaeru) is the 7th rank of the Hierarchy of Angels, and is the only angel currently bearing the rank of Principality Luka meets. Her duty is to oversee the souls of the deceased and judge them based on how they lived their lives. She uses her snakes to punish the guilty, and also is aided by them in carrying out her judgement, and even sits atop them like a throne.

She arrives in Enrika to continue the invasion, and rapes one of the defending elves with her snakes before Luka cuts her free and defeats Nagael soon after.

“An angel of punishment and judgement accompanied by her sacred snakes, she falls in the seventh circle (Principalities). Usually enshrined in the court of Heavens, her normal role is to judge the souls of humans after their death depending on how they lived their lives. Those found guilty of crimes are punished by her sacred snakes. Tightly coiling around them, they punish the criminal with agonised ecstasy until they repent their sins.

The fight is similar with Archangel Ranael; use Fallen Angel Dance, then bum rush her with whatever. However, all Nagael has is a bind that requires three turns of Struggling to break free from.

“Did you enjoy your torment by snakes? I know how much you love things coiling around you, after all… Since your opponent is an angel, use Fallen Angel Dance. You’ll be able to avoid her Binding attacks with a high probability. Her HP is high, however, so plan for a drawn out fight. Keep an eye on your SP to make sure you can always recover. Now go, oh brave Luka. Turn that evil angel back into raw holy energy.” 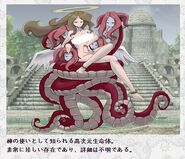 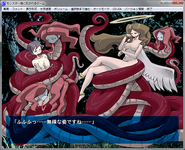 A beta version of the angel’s H scene.
Community content is available under CC-BY-SA unless otherwise noted.