View source
watch 04:03
Wiki Targeted (Games)
Do you like this video?
Play Sound

While there are many swamps filled with toxins and poisons, the largest swamp, located east of Goddard, is perhaps the most famous. Known for being infused with enough magic for Ghouls to be raised from the corpses of the females that died near it, nearly the entire area is knee deep in toxic poisons. As one might expect, prolonged wandering in the swamp will only add to the amount of bodies. This is not helped by the fact that zombies known as Warmers hunt for anyone that enters, and Brom Girls, a variant of the normal Slime Girl, also wander about. To those that enter, there isn't much to find, but it is said that a contract requiring a magical person is done here. Perhaps the local town might know more?

Luka and his team go through this place twice. The first time, they're tasked with meeting an expert in magical matters to take care of Grangold's golems. Said expert turns out to be none other than Mephisto, and after a little argument with Sonya, she joins the team without further ado.

The second time is after he unseals Cassandra and Emily in Lady's Village. The duo decides to participate to the Magical Girl tournament selection that started there. Their maid Ran and the heroine decide that they should check on them, as the creation of magical girls is forbidden by the Monster Lord since this magic uses the power of grudges. After seeing Magical Mari-chan in Goddard, Luka's party returns to the area and fight the duo of leaders from Lady's Village before recruiting them. Then they face Succubus Witch who also aimed to claim the title for herself. Once the succubus soothsayer is beaten, Magical Mari-chan appears as the power of magical girls prepare to make Luka a new one. However, Granberia teleports in, shoves Luka away, and receives the power instead, giving her an absolutely ridiculous outfit. After a long, awkward moment, Granberia leaves the area without a fight.

The place is visited a third time as Cassandra flees the Pocket Castle after having taken her revenge on Candy. Just as usual, the party beats her, and when Candy steps in to reclaim her power, a full altercation explode ending with Emily, Cassandra and Candy all sealed. 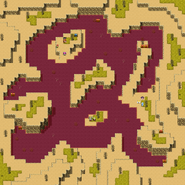