Plansect Village (プランセクト村 Puransekuto Mura) is a location in Monster Girl Quest. Located in the Noah region, it is a village where two separate types of monsters (insect and plant-based monsters) live in harmony with each other. The name of Plansect Village itself alludes to such a harmony: "Plan-" from Plant and "-sect" from Insect.

Luka initially wants to go there to witness this peaceful scene for himself after first hearing from a Tarantula Girl in Grand Noah who claimed to be from there. Alice advises him to avoid it, however this only serves to fuel his curiosity.

When he arrives, he discovers the exact opposite of what he had expected - rather than living harmoniously together, the two separate factions of monsters are currently at war. Spotting Alra Arum and Alra Rooty losing a battle with a Mosquito Girl, Moth Girl, and Caterpillar Girl, Luka immediately sides with the plants. He defeats the insects, sealing all except the Caterpillar Girl who flees. The two plants thank him and agree to take him to their base of operations.

Luka then meets Alra Priestess, who convinces him to join their side. Their next plan would be to undergo what would appear to be a mass confrontation between the two factions, a distraction while they send Luka to assassinate Queen Bee, leader of the insects.

When Luka proceeds with the plan, Alice shows up and comments on how "easily seduced" he was to join the plants. Luka questions her authority with her "cute subordinates" fighting over a pointless war; Alice responds that if she were to intervene and force a treaty, the two factions would immediately resume fighting once she left. She then states that a sacrifice is needed for coexistence.

En route to the insect hive, Luka is attacked by a Centipede Girl, a Silkworm Girl, and a Hornet Girl before finally meeting Queen Bee. She refuses to stand down, for she is defending her tribe. After a long battle, Luka seals her, thus ending the war...

...Or so it would seem. Alra Arum and Alra Rooty arrive and "celebrate" their victory by devouring the insects, much to Luka's horror. The two absorb a Hornet Girl, and, when Luka intervenes as they target a Caterpillar Girl, they declare him a traitor to their cause and proceed to attack him. He seals them both, then turns to the Caterpillar Girl and asks if she would do the same. She says it would be disgusting to eat the plants that ate her friends.

A Mosquito Girl appears, reporting a massive army of plants not far from the hive. Luka rushes out and intercepts them, sealing the Alra Vore, Alra Parasol, Alra Prison, and any remaining followers. Amidst a finally peaceful glade of sealed plants, Alice arrives and tells him that his mistake was only listening to one side of the story. She tells him to follow his own convictions, not those of an image of a hero which he had used to vindicate his own actions. Frustrated, Luka decides to end this once and for all.

Luka fights Alra Priestess, who reveals that she'd had no intention of ending the war once the Queen Bee fell. After defeating the leader of the plants, he challenges their champions, the Canaan Sisters: Dorothy, Raffia and Deana. With the defeat of both the insect and plant leaders, the war is finally over.

The pacifists from both sides then reveal themselves, coming out of hiding and helping to build peace within Plansect Village by first unsealing the monsters (except those who refused the peace, such as the Canaan Sisters).

Later this place is revisited by Alice and Luka, as the Plansect Village is attacked by a brainwashed Queen Alraune, and her subordinates Dark Dryad and Walraune. The trio of monsters had asked Alra Priestess to resume her war of extermination against the insects and to eliminate Queen Bee, but the priestess refused and was consequently captured. Alice suspects that the gentle queen has been brainwashed, which is all but confirmed when they see her by themselves. After Luka steps in and save everyone, it is revealed that the culprit is Tsukuyomi, one of the Next Dolls created by Promestein who used some cells from Tamamo.

Furious to have been manipulated, Queen Alraune use her trump card to bring Tsukuyomi down with her as the next doll attack her: Aztec Rose. The poison heavily damage the Next Doll who barely escape with her life. Judging priestess fit to be a ruler, Queen Alraune pass her her title as she dies.

This place can be revisited again in the epilogue, as it welcomes refugees from Undine's Spring, including the titular spirit and Erubetie, who attempts to tempt Luka when he sees her. 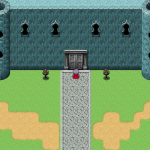