Orc Girl, or Hip as a companion, is a monster in the first part of Monster Girl Quest: Paradox.

“A powerful pig-like monster who lives like a bandit and raids human villages with a club in one hand. She doesn’t just plunder goods, but kidnaps men of age as well, and brings them back to her den to insult them. Sometimes violent gang bangs are done to acquire semen. Surprisingly, she rarely ever kills humans, and only uses violence for intimidation.

Her vagina contains spiral-shaped folds which cause most men to ejaculate right after inserting. Her muscular lower body also contributes to her vagina’s tightness, giving it one of the best among the Beast race. Many kidnapped men become captivated by their renowned genitals.

They usually act in a group, but when they are alone, their personality becomes quiet and they will even show a playful side. Although they have a ferocious group mentality, they appear to be a gentle and honest species at their core.”

She uses an attack which uses the Lightning element and has a chance to apply Shock, so you might want to reconsider taking a monster like Lime into the party. If she binds Luka, then struggle. It only takes a single turn to break out of.

Because she is a beast, she’s weak to Pleasure and the associated status effects, so the Imps(Rami/Remi/Rumi) help deal with her. As can Ilias/Barbun, in the form of Beast Killer arrows.

“The prey of an Orc Girl… Are you the Knight or the Princess? Don’t let the dumb brute get you one over! The Orc Girl is a highly offensive opponent. If her powerful techniques hit you, it will be painful. But since she’s part of the Beast race, status effects are powerful. Inflicting blind, for example, will be very effective. She’s also vulnerable to pleasure, so those work as well. She’s fairly difficult in an up front battle, but is fairly brittle. Now go, Princess Knight Luka. Nobody cares if something like an Orc is removed from this world.” 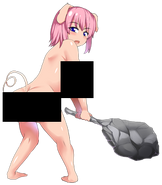 Cut-in
Add a photo to this gallery
Retrieved from "https://monstergirlquest.fandom.com/wiki/Orc_Girl?oldid=85844"
Community content is available under CC-BY-SA unless otherwise noted.