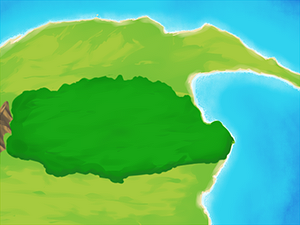 Noah (ノア Noa) is the northernmost region of Sentora. It is the fourth main area of Monster Girl Quest that Luka explores.

Most of the region is covered in a thick forest sparsed by water streams. The capital of the region is Grand Noah, and is famous for its colosseum. Other notable settlements include Yamatai Village, which is separated from the mainland by a mountain and possesses a radically different culture. Rumors also speak of hidden elven and kitsune villages, but the secretive monsters keep the location of their settlements hidden to enjoy some measure of tranquility.

Contrary to every region south of this one, this area is openly friendly to monsters: humans and monsters work and live side-by-side in Grand Noah, and monsters are openly worshipped in Yamatai Village as the population hopes to attract their favors. Still, it doesn't mean that frictions and conflicts don't happen. Undine's Spring is currently taboo, as the slimes there attack anyone that trespass on their territory, and the Water Spirit is hiding herself. Simultaneously, the settlement of Plansect Village is in an open civil war.