Nanabi is a seven-tailed kitsune who appears in Monster Girl Quest. She is the third strongest kitsune and is one of Tamamo’s right-hand soldiers. As a seven-tailed fox, she is far more powerful than Luka, who barely holds his own during their battle.

Nanabi follows her master into the Treasure Cave and guards the door at the end. Luka engages her and withstands her Seven Moons twice, however she puts him to sleep. Unfortunately for her, this unlocks his angelic powers and he is able to defeat Nanabi while asleep with various techniques that seem far too powerful for his current state. In addition, he seems to be able to naturally seal the seven-tailed kitsune without using the Angel Halo with one of the techniques, named Daystar.

After Tamamo comes out of the door, she lacks the power to unseal Nanabi and tells her that she must wait. Nanabi eventually leaves along with Tamamo after a long discussion.

Nanabi is seen in the Monster Lord’s Castle with other kitsunes helping Tamamo decipher Promestein’s discs that detail her evil plots. She is also instructed to locate the generator powering the Six Ancestor’s Seal on Alice, and senses a faint presence coming from somewhere in the Forest of Spirits.

Following Tamamo’s victory over Tsukuyomi and exhausting her Six Ancestor power that results her regressing in mind and spirit, Nanabi gathers kitsunes to restore their master’s power.

“A powerful animal-based monster of the fox family and a subordinate of Tamamo; she is fiercely loyal.

Though she can eat anything, she prefers male semen above anything else. Using all seven of her tails, she holds down the male as she forces him to ejaculate. In addition, she is able to turn her tails into semen-sucking tentacles, sucking in the male’s penis and using them to milk the man.

Though she normally just feeds, if she finds a male she likes, she will make him her mating partner. Using her amazing vagina, she will force the male to mate with her continually until she conceives.”

With seven tails, she can easily be overwhelming if Luka isn’t careful. She also has binds which requires two turns of struggling. Thunder Thrust first and throw in Demon Decapitations as needed. Additionally, Meditation plays a critical role in this battle.

The main difficulty with Nanabi is her Seven Moons technique. A leaf appearing on her head followed by three turns of Magic Concentration signals the use of this technique, so use this time to heal. Right after she finishes charging, immediately Guard to withstand the massive tail attacks; Luka needs at least 100 HP (though one can get away with being a few HP below in the second Seven Moons attack) in order to survive. She then takes one turn to rest. After surviving, use the rest of the SP to Meditate and attack normally for the remainder of the battle.

After dealing more damage, she will attempt Seven Moons again, so repeat the strategy used to survive it. Annoyed, Nanabi then uses Hypnotic Eyes to put Luka to sleep and prevent him from recovering. She then uses Tail Massage, only to be dodged by Fallen Angel Dance, which surprises her. She uses it again, and Luka mysteriously dodges with the same technique. He then attacks her with Ninefold Rakshasa, shocking her even more. She uses Two Moons, which again is dodged, and returns fire with Heavenly Demon Revival. Nanabi then attempts Seven Moons, but Luka counters and seals her with Daystar.

If Luka is defeated, Nanabi will rape him with a vaginal intercourse. If he were to succumb to her Seven Moons, the tails become tentacles, which she uses to suck on Luka’s penis. In any case, he becomes her husband after rape.

“Played with by the fox monster? How pathetic… But she is an enemy too formidable for you to fight at the moment. There are several things you must keep in mind. She has too much HP for you to deal with as you are now, but there’s no need to deal with all of it. Once you reduce it to a certain amount, something might happen… In addition, she deals a lot of damage, so you must take care of your SP so you can use it when it’s important. This is a long fight, so using your SP for healing yourself may be a wise move… Lastly, the most annoying move, Seven Moons. If you don’t have enough HP and Guard, you will surely be defeated by it. However, it takes several turns for Nanabi to accumulate enough power to use this ability, so you can heal yourself and prepare. After she uses the ability, she won’t take any action for a few turns, so you have a chance to rebuild your defences. To achieve victory, you will have to be careful with your timing. Though a trivial, useless point, there are two defeat scenes. Not something a Hero would pursue, but do with the information what you wish. Now go, oh brave Luka. Even against an enemy more powerful than you, never yield.”

Nanabi with a leaf on her head, while she is charging her powers.

Nanabi once her tails have transformed. 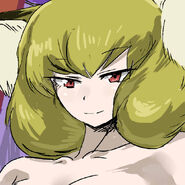 Drawn by Setouchi.
1483053909(1)-1.jpg
Drawn by Setouchi.
Add a photo to this gallery
Retrieved from "https://monstergirlquest.fandom.com/wiki/Nanabi?oldid=92190"
Community content is available under CC-BY-SA unless otherwise noted.