Located on the west side of Ilias Continent, just south of the Nameless Slums. It’s created to contain 20 unique weapons that were unintentionally created in the immemorial age, through the mixture of darkness and light that the two Goddesses manifested through their hostility against each other’s existences.

This castle was created from both Goddess Ilias and Dark Goddess Alipheese to secure and contain these special weapons, but during the Great Monster Wars, when the two forces unleashed everything they had against each other, these 20 weapons were unsealed and are being used by both the two Goddesses’ factions. Currently, all of them have been lost, and the castle that didn’t have a purpose any more has been banished in the void of spacetime.

However, for an unknown reason, it returned to the world and stood at the southern side of the Nameless Slums. 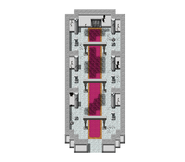 There are 20 pedestals, arranged in two rings around the centre of the castle, each dedicated to an ancient weapon with divine powers.