Formerly the younger sister who lived on a farm in the Succubus Village, they were too poor to leave their home to avoid the influence of the Purple Sabbath and became succubi themselves. Her monster name, Mincubus, is a title given to immature succubi who are very young.

Despite being young, she is still very powerful as the average immature succubi. She uses various sexual techniques which include clothing and hair. 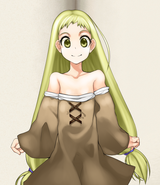 Mincubus in her human form.
Add a photo to this gallery
Retrieved from "https://monstergirlquest.fandom.com/wiki/Mincubus?oldid=39851"
Community content is available under CC-BY-SA unless otherwise noted.