Minagi (魅凪) is one of the Six Ancestors, of the Succubi and, by extension, Vampires too. She is infamously known as the “Great Whore of Babylon” due to her immense sexual skill, notably the Great Barrier of Babylon that raises sexual excitement in human males to the extreme, and is the most hated monster by Goddess Ilias. She also created the Lilith Sisters.

While Minagi makes no appearance, her moniker is mentioned a few times in Chapter 3.

When Goddess Ilias assaults the entire world and assigns Black Alice to attack the Succubus Village, the leader of the attack sent there, Eva, erects a large barrier known as the Great Barrier of Babylon. According to Alice, the barrier is a prohibited art that sends human males’ sexual excitement to maximum levels, causing them to ejaculate mindlessly from simply being touched or seeing a woman; the barrier then absorbs the semen and converts it to energy for the caster. Luka is mildly affected by the barrier due to his immense strength and the sheer difficulty of reproducing such an ancient art. However, even after Luka and Alice defeat Eva, the barrier remains in effect due to its self-sustaining properly; it is only dispelled when Amira and her Unfortunate Friends snap the men out of their trance and stop fuelling the barrier.

Following the defeat of Goddess Ilias, Minagi somehow escapes her seal. Having come to a desire for Luka, the hero who saved the world, Minagi plots to turn him into her sex puppet. She dispatches her subordinate succubi to attack a remote village, successfully luring in Luka and his travelling companion and wife Alice, then transports them to a dimensional space dubbed the “world of temptation”. Alice is distracted by illusions of parfait and disappears, while Luka is raped by illusions of succubi, Erubetie, Alma Elma, Crab Girl, Spider Princess, Emily, and Alice.

Realising Luka’s sanity hasn’t broken despite constantly being pushed to the brink of death and being raped by an illusion of his lover, as expected of the hero who defeated Goddess Ilias, Minagi personally steps in. After a brief introduction, Minagi easily overpowers Luka and proceeds to rape him, but on the verge of death he finds the strength to retaliate and slashes her with the Angel Halo, dispelling her world of temptation. Luka wakes up in the real world and finds the real Alice looking over him, explaining that he passed out in the middle of the battle and ejaculated repeatedly in his sleep. Meanwhile, Minagi comes to desire Luka even more than ever, and tells him to be ready for the next party.

Minagi makes no appearance in the first two chapters of Paradox, but is referenced by several characters. She is first mentioned by Ilias when Morrigan attacks Luka.

One of Morrigan’s lines when you talk to her in combat implies that, like Alma Elma, Minagi is a master of martial arts in addition to sexual arts.

During the battle in Grangold Castle, when the alternate Tamamo no Mae orders Lilith to handle the party, the latter tells the former that the Lilith Sisters are direct subordinates of Minagi.

"Extolled as the Great Whore of Babylon, she is the ancestor of all succubi. Proud of her tremendous magic power, especially in the arena of seduction techniques there is no-one who stands beside her. She even has the ability to consume a whole city by herself, enwrapping it in a pleasure field. Also excelling in normal magic, she is placed second after Tamamo in magic skill.

She is also extremely proficient in unarmed combat; she prides herself on being a match for an army of ten thousand even without her great magic. She uses this hand-to-hand skill as cover; amongst the Six Ancestors, she's fairly inferior in stamina and endurance. In a fight with enemies on the same level, like the Seven Arcangels, her low stamina and endurance could expose her to defeat. For that particular conflict, her great seduction magic is a massive threat to the Archangels. Making use of the angels' weakness to pleasure, even in Heaven she's a menacing presence.

In the parallel world ruled by the Dark Goddess, called "Makai," Minagi is entrusted with administering San Ilia. The once-holy city is presently a nest of succubi. Under Minagi's rule it flourishes as a dark capital seething with hundreds of thousands of lust demons. It is shrouded in the darkness of night, and there proceeds an unending feast of extreme lust. It's said that various men from all over Makai are transported to San Ilia, offered up for the lewd feasting.

The Great Whore of Babylon has absolutely no discrimination about any type of man. Young men, and children and elders, and the handsome and the ugly, she grants pleasure fairly to all, and wrings them out. Those men presented to Minagi will wither, while tasting a superlative ecstasy. Those men who lose to her, too, have their energy fucked out of them without exception. Whether they are drained out in the space of an instant or leisurely over a long period is up to Minagi's whims." 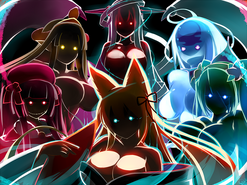 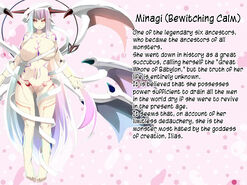 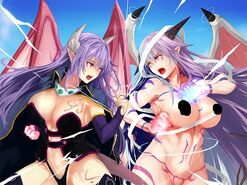 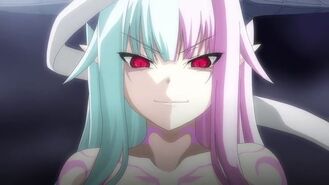 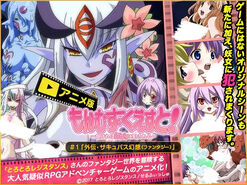 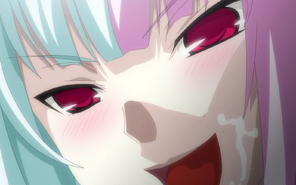 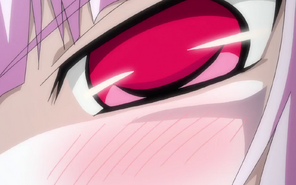 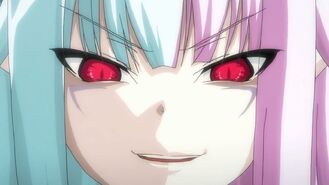