The Mimic is an Undead monster encountered in Chapter 1 of Monster Girl Quest. She resembles a man-eating chest, lined with teeth when opened and revealing what seems to be a pale, undead girl with black hair and clothes. When closed she looks exactly like a normal chest.

Luka finds the Mimic and has the option to fight her or to ignore her. If he chooses the former, the Mimic attacks him but is defeated and sealed. As with Mandragora, there is no reward for skipping the fight with Mimic. However, Luka will gain experience if she is defeated, making the upcoming battle with Nanabi a little easier. Alice does chastise Luka for opening the chest in the first place though, saying a treasure chest in the middle of a room is obviously a booby trap.

“A monster that hides in a treasure chest, it appears to be a part of the undead family. Their body is composed of the chest and their digestive juices contained inside. When an adventurer opens the chest, the Mimic will drag them inside and close the lid, bathing them in digestive juices.

A very timid monster, it spends almost it's entire life shut inside the box but once she catches her prey, her attitude completely changes as she enjoys dominating them. Dragging her prey inside of her, she enjoys watching their despair as they are slowly eaten. Moreover, Mimics will be sure to cover the male's genitals with her digestive juices first, cruelly watching their reactions. A man captured by a Mimic can only look forward to a disgraceful, miserable death.

There have been cases where the Mimic really enjoys the reactions of her catch and chooses to instead torment them for the rest of their life, or until they become bored. When this occurs, they will then eat their prey.”

*Withdrawal: Closes Mimic’s box, any attacks in this stance lead to a Swallow counter-attack.

Swallow: Counter-attack which leads to Digestion on the same turn.

Being optional, Mimic is a very difficult battle, especially at the stage fought in the game. She will spend several turns either being open or closed and the objective is to hit her while she is open. If Luka attacks her when she is closed, she promptly uses Swallow as a counter-attack and end the battle, using Digestion relentlessly to finish Luka off. Thus, Luka must Wait or Guard until the box opens.

Even when she is open, she isn’t a cakewalk: after revealing herself she may use Slow Swallow, in which case requires many turns of struggling to break free and resume attacking afterwards. However, if Luka fails to escape from Slow Swallow within four turns, he will be completely restricted of all movement and receive a one-hit KO. Luckily she will sometimes just sit there and do nothing, allowing Luka to land a hit without being attacked in return.

On higher difficulties, her increased damage output can easily end Luka if he is not at full HP. The safest approach is to only use Normal Attacks and Meditation.

Depending on how Luka loses, there are two scenes. Losing to her Swallow/Digestion counter-attack or failing to escape from Slow Swallow will have Luka being dissolved and eaten by the Mimic. Losing to her by Slow Swallow but when not fully captured will have her dragging Luka into her box where she toys with him for all eternity.

“You became the Mimic’s prey? Pathetic… Did you enjoy being eaten by such a hateful monster? The Mimic has a very specific attack pattern. The most important point is to hold your attacks while the chest is closed. If you attack when she’s in that state, she’s sure to counter. If you hold your attack, you will surely find an opening sooner or later. Additionally, she will try to draw you into her chest… You must struggle with all of your might at that point. The Mimic has two defeat scenes, as well… But if you tried to see both of them on purpose, you wouldn’t be a Hero, would you? Anyway, the Mimic is a formidable enemy. You can always avoid the fight by not opening the chest in the first place. If you’re unable to win no matter what, that’s also an option… But whether it’s an acceptable choice for a Hero is another story… Now go, oh brave Luka. Crush that insidious monster who tricks travellers…” 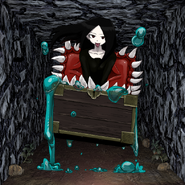 Mimic disguised as a chest, readying for a counter-attack while hiding.

Drawn by Setouchi.
Community content is available under CC-BY-SA unless otherwise noted.