A once thriving village that is east of Fort Gold. Almost no living beings are left, with the exception of Ant Girls and Automata Girls, who are on guard for intruders. Nearly every building has become rubble, with poisonous swamps everywhere you look. There is pretty much nothing of value here... the only reason you would be here is to meet someone undercover.

This place also makes a short appearance in the Collaboration Scenario when the White Rabbit does her exposition in the prologue. She explains that she attempted to go to another dimension to guide the Monster Lord there, but instead ended meeting two unrelated strange persons, and she came back in a hurry. She then noticed the unusual set of coordinates, and before she can understand what happened, a strange succubus appears. She unsuccessfully attempts to convince her to return to her own world, and the succubus brings her to her own dimension before exploiting her nature as a Nightmare to incapacitate the White Rabbit and start the actions that lead to the Collab Scenario happening. 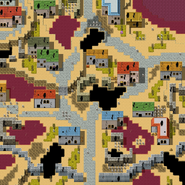