Lady's Village is a location in Monster Girl Quest Paradox

Lady's Village is a village famous for having men that entered never leaving again... or so it was in the past. Nowadays, Lady's Village acts like other villages, men can enter and leave without physical harm. Of course, not everyone thinks the same way...

The lord, Cassandra and her daughter Emily, had been attacked by an unknown person, and then attacked again by Candy, a greedy witch, who stole their power. Taking advantage of this, residents of the town who missed the days when they could drain men to death have traveled along with the perpetrator to Scenic Hill, where they attack and kill anyone who passes by.

After having their powers restored by a passing party, the lord and daughter attempted to become Magical Girls at the Poison Swamp in western Gold, but fail.

This place is later revisited by Lauratt and Rigeo as the village is attacked during the Collab Scenario by Mysteltainn, Ogretooth and Executioner who are putting everyone to the Land of Night under orders of the Queen of Dreams. As the situation becomes desperate, Magatsu steps in and saves the duo. 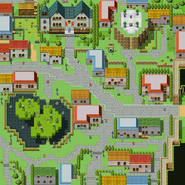 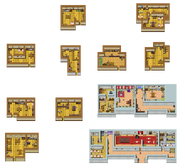