Labyrinth Caverns is a location in Monster Girl Quest: Paradox

A cave that serves as a passageway to the mysterious Minotaur's Labyrinth. It's rather short, but there are still dangerous monsters such as Nure-onna, Spirit Girls and Okiku-Mushis. At the exit, there is a Minotaur Girl who is waiting for some Sukiyaki and is willing to give a proof of friendship to those that do.

This place does a small reappearance in chapter 3 of the Collaboration Scenario, as it is the exit point of Oxton Coast. The duo of Lest and Tarsa progresses through the cave and camp with shady adventurers, although "nothing happens" during the night. They then meet a priest who allows them to access noteworthy jobs, and fight a Devil Fighter who's an assassin sent by the Alliance of the "Queen of Dreams." This place also now houses the Minotaurs from the Minotaur's Labyrinth probably due to Demon Co Queen's plot failed thanks to Luka and his friends. 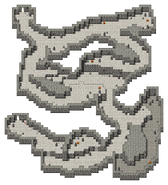