Kyoryuu is a strange, dinosaur-like monster that roams Hellgondo. Although she is rather slow and unintelligent, she descends from the dragon race, meaning she is incredibly powerful and dangerous.

“A subspecies of the Dragon race with a gigantic body. Her movements are slow, and her intelligence is low, but her power is incredible. A common human being cannot hope to fight against her.

When fortunate enough to find a human male, she will suck on him in her giant mouth, extracting his semen. Though her tongue is gigantic, she can skillfully control it to easily make the man ejaculate inside her mouth.

Though she is surprisingly gentle and quiet, she is still a carnivorous monster. She’s a dangerous monster, but is only known to inhabit the northern continent.”

Not a particularly dangerous monster, she does have her Earthquake which causes paralysis along with high damage. Sylph and Gnome are necessary for this battle. Meditation can also come in handy. Otherwise, bum rush her with Salamander and Death Sword Chaos Star.

It is impossible to struggle out of her restriction move; the only way to escape is to attack her from the inside.

If Luka loses, she’ll put him in her mouth and keep sucking on his body like a piece of candy until he dissolves.

“This is the first time I've had a Hero retire to become a piece of candy. Your bizarre interests never cease to amaze me. You cannot struggle out of her restriction move. The only way to escape is to attack her from the inside. Sylph can help you avoid her paralyzing move, so she is helpful. In addition, the Kyoryuu's damage output is huge, so Gnome will be useful. Fighting carefully with Sylph and Gnome can be good, but trying to go all out with powerful moves may bring victory, too. Now go, oh brave Luka. The monsters of Hellgondo may be strong, but you must not lose heart.” 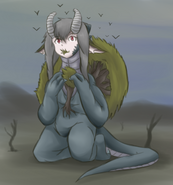 Kyoryu by JCP.
Add a photo to this gallery

Retrieved from "https://monstergirlquest.fandom.com/wiki/Kyoryuu?oldid=99386"
Community content is available under CC-BY-SA unless otherwise noted.