Kitsune is a member of the race of fox monsters of the same name, encountered in Chapter 1 of Monster Girl Quest. This particular one has only two tails, meaning she is relatively weak by monster standards.

Luka encounters Kitsune in the Treasure Cave, having been separated from her leader, Tamamo. She is careless in how she speaks and accidentally reveals to Luka that she is assisting Tamamo. Despite her careless revelation of information, she refuses to let Luka by without a fight.

After they battle, the Kitsune is sealed, but proceeds to bite Luka before running off, only to be trapped in the web of a Spider Girl. Luka does the heroic act and defeats the Spider Girl, only to be bitten again.

When Luka meets Tamamo, she unseals the Kitsune and his heroic act from earlier allows him to claim the Poseidon’s Bell.

After Luka averts the crisis in Yamatai Village, then returns to the town and heads to the Fox Shrine, the same Kitsune from the Treasure Cave is in Tamamo’s place, and recognizes the "hero" from before. She is then bullied by Alice who picks her tails and steals her thin fried tofu.

After Luka averts the crisis in Yamatai Village again and returns to the town's Fox Shrine, the Kitsune is still there. Alice then gives her tofu, but it turns out to be too spicy for her to handle.

“An animal-based monster of the fox family, kitsune are known to have the highest potential magical power among animal-type monsters. Though this kitsune is still young, a normal human would struggle to fight on equal terms.

Fascinated by male genitals, they will use any chance they can take to play with them with either their hands or tails. When played with by their soft tails, most men are unable to resist giving into the Kitsune. In addition, a Kitsune’s vagina is many times more pleasurable than a human female’s. Able to skillfully control every muscle inside of them, they can adjust the tightness to whichever level they wish.

In the Kitsune family, to get married you only need your partner to orgasm three times. Once the man gives into temptation three times, they are recognized as agreeing to be the Kitsune’s husband. Unfortunately, due to the sexual skills of a Kitsune, if they fall in love with a man at first sight, the man will have no choice in the matter.”

Despite being young and having two tails she is more than a match for normal humans despite her tendency to slip up. The battle is particularly straight forward with no binds and is only marked by the unique Clone action halfway during battle.

The battle is fought in stages, for the first part she will alternate between Fluffy Tail, Lick Lick and Rub Rub, all of which are standard attacks. The second stage is triggered once her health is reduced below 50%, using the turn to activate Clone which will create two false illusions of her. Luka must decide which one to attack but she still only gets one attack per turn, though if he hits a fake, it will not disappear. The Kitsune on the left smirks once the technique is executed however, which gives away her position.

During the Clone phase, she will still use the first three attacks, attacking the clones will result in causing no damage at all, giving Kitsune a chance to attack unhindered. Attacking the real one will force her to counter attack with Double Tail which hits twice. After using it once she will revert to her original attack pattern for the rest of her third phase.

If she lays the smack-down on Luka, she will proceed with getting herself and the Hero Apprentice married. The route to such a coupling is simply forcing the human to orgasm three times, far from a consensual approach, but one that turns Luka into a willing husband upon reaching her home.

“Violated by such a weak little fox... Have you already lost the will of a Hero...? The Kitsune doesn't use many strong attacks. If you don't mess up too many times when she clones herself, you won't take too much damage. As long as you closely watch what's happening, you should be fine. Now go, oh brave Luka. Never let such a tiny fox beat you again...”

Kitsune bewildered when discovered by Luka. 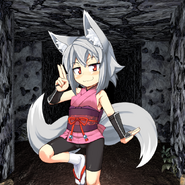 Kitsune feeling confident in her abilities.
Community content is available under CC-BY-SA unless otherwise noted.