View source
watch 03:01
Wiki Targeted (Games)
Do you like this video?
Play Sound

Ilias Cont. South Tartarus is a location in Monster Girl Quest: Paradox. This is the first Tartarus to be visited by the player.

Welcome to the Ilias Continent South Tartarus also known as Tartarus I299387. Tartarus is one of the distortions in the world and is shrouded in mysteries. Inside you'll find Sully, Jaide, and Shesta wandering around.

Once Luka arrives at the Tartarus, they see White Rabbit leap down the hole.

The cataclysm that devastated the world 30 years ago opened seven rifts, to a region called Tartarus. The first one is in the south of the Ilias continent where numerous scholars are investigating the phenomena. If you talk to one of them, he will mention that there are rumours of a "white-robed female researcher " being seen in the Southern Grangold Tartarus.

At the bottom of the ladder, is another world entirely. Surrounded by technology which shouldn't exist yet, and the walls are made entirely out of a metal not yet discovered by the world's inhabitants.

After following the White Rabbit through the Tartarus, the party comes to an abrupt stop at the door which has prevented the research team outside from exploring the Tartarus further. Ilias/Alice is familiar with the door and explains that this door is a gateway to another dimension. Very few beings have the power to travel between them. Luka tries opening it himself, and he does just by touching it, much to the surprise of the heroine.

Travelling through the door takes them to the dimension, which seems like a typical town, outside of the purple veins growing out of the ground. Talking to the man standing by the door reveals that this settlement is Remina, which should have been destroyed over 30 years ago when the Hellgondo Tartarus consumed it. Talking to him further causes apoptosis to take over, and he ceases speaking entirely.

Talking to the City Girl wandering around outside one of the homes, causes the same thing to happen. At first, she starts introducing them to Remina, but apoptosis takes over again. Unlike the man, she morphs into one of the apoptosis beings, a Shesta.

Exploring the nearby home introduces ???, a Scylla monster. She attacks the party when they startle her unintentionally. Defeating her causes her to calm down, and she will go back to eating the apples.

Leaving the room and then re-entering it allows Luka to recruit ???. Sonya can understand some of the sounds she makes, and names her Nuruko, taking after Yamatai language. In the room, there is also a note saying "EXPERIMENT FAILED".

As they progress, they reach the Corridor of Chaos, which seem to remind Luka of Tartarus, although he doesn't act upon it. They eventually reach a magic circle that teleport them at the entrance to Tartarus, although the expedition team has vanished, and the surrounding area is dead.

However, White Rabbit pops up to greet them. She didn't expect the party to make it this far and congratulates them for doing so, annoying the heroine who points out she clearly led them here intentionally and is tired of these games.

Luka's main companion asks how a mere human like Luka can travel through the dimensions, when even a God cannot. White Rabbit replies that it is a unique ability of this world's Luka, annoying her even more. White Rabbit tells her that her role is to guide them, not to explain. They will have to find the answers themselves, before waving goodbye.

Before they can continue, White Rabbit appears again to warn them to stay on the road; there are "arrogant beings who believe that walking on soil is beneath them". Ilias knows that she's talking about angels, but gets reminded that if they saw her in this form they would certainly take her for an imposter and attack her. Meanwhile, Alice simply suggests remaining cautious.

Walking off the road will cause Archangel Ranael and Principality Nagael to appear and wipe out the entire party as they are far more powerful than the group. There's no interest in fighting them, even once able to take them down.

At the end of the road, Sonya and Luka are traumatised to find Iliasville in ruins. They think it's their Iliasville, but they realise it must have been years after the village was attacked to be in the state it's in currently. Skeletons are everywhere. They can recognise some of them. The one with the hunched back was probably the village chief.  The one with a damaged right arm was Lazarus. The nearby well is filled with the bones of the deceased.

The graveyard at the back of the village has increased in size exponentially. One for every villager. Within the cemetery, they see the graves of two people next to each other, Sonya and Luka.

Luka’s diary next to the gravestone confirms that this is Luka. The entries in the diary are the same as his normal one, but there is an added entry at the very back.

Reading through the added entry reveals that in this dimension, Luka never challenged Granberia in Iliasburg. Instead, he decided that adventuring life was not for him and returned home. Consequentially, that meant Luka never went off on his adventures trying to bring co-existence. Because Luka didn't solve the various problems going on in the world and he never realised his true angelic power, no one was able to stand up to Ilias when she decided to remake the world. This dimension is the consequence of those actions.

There is also a final note written by someone else that Luka had fought and died a true hero while trying to fend off the second wave of attacking angels. The very beings the town had worshipped for millennia were indeed the same ones that brought it down.

The main heroine reasons that this has to be a parallel world. They try to leave the dimension using a harpy feather, but it doesn't work for her. She asks Luka to try it instead, and when he uses a Harpy Feather, it teleports them back to the Paradox Iliasville. She then calls for a strategy meeting in the Pocket Castle, where they take a moment to debrief about what they see and discuss their next plan of action. 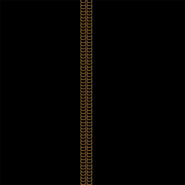 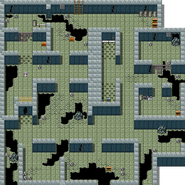 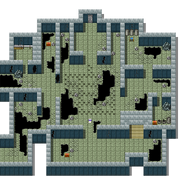 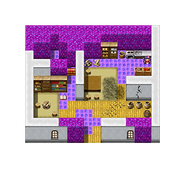 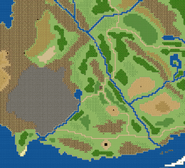