Humans are one of the three main races of the Monster Girl Quest setting, the other two being the monsters and the angels.

Humans are the only one of the three races to have both males and females, and are therefore the only race that can reproduce independently. The other races, being all-female, can only reproduce sexually by using human males (though new angels can also be created by Goddess Ilias). Interbreeding between humans and other races may lead to hybrid offspring with monster (e.g. Sabasan royalty such as Sara) or angel (e.g. Luka) blood. Humans are defined by their submissiveness, as once a man ejaculates, they reach a state called Critical Ecstasy and are easily taken advantage of. Humans who succumb to Critical Ecstasy are forced to submit, no matter the difference in level between the monster and human. Their submissiveness is also evident with the Grand Noah Colosseum, where men "battle" monsters just to have their fix of sex.

Humans can learn magic. In the original Monster Girl Quest, this is a difficult task that requires a human to spend their whole life studying. In Monster Girl Quest: Paradox, the increased concentration of mana in the atmosphere makes it much easier to learn magic, and thus magic use is widespread among the humans.

Artificially experimented humans, Undead and Lesser Succubi are humans who have been transformed into monsters by powerful magic. Transformed humans may lose their willpower which is replaced with insatiable lust, though they may regain part of or all of their humanity by sealing their monster part.

Humans are the most abundant race in the world, having ten times the population of monsters and a hundred times that of the angels. The causes for this have not been revealed.

The dominant human religion focuses on worship of Ilias, the creator of humanity and the (supposed) creator of the world. This religion has five commandments: (1) “Thou shalt not have intercourse with monsters”; (2) “Be dutiful in your prayers”; (3) “Point your sword at the Goddess and thou shalt cry” (sometimes applied even to statues of Ilias); (4) "Thou shalt not rely on other gods"; (5) "Thou shalt not disgrace the Goddess". The strength of faith in Ilias varies, being strongest in the south (with the southern continent being named for her) and weakest in the north.

Ilias blesses human warriors known as heroes to combat the monsters. The only real effect of this blessing is to make their semen taste bad, discouraging attack by monsters. Heroes are given some privileges in human society, including discounts and the right to enter people's homes and take their belongings. However, most heroes lack the skill to actually defeat monsters, barring some notable exceptions such as Luka, Marcellus and Heinrich.

Two locations are important to the Ilias faith: the city of San Ilia, home to the San Ilia King (the leader of the priesthood); and the Shrine of Ilias in Iliasville, where Ilias appears to bless heroes.

In the original Monster Girl Quest, when Ilias declares her intention to remake the world (which would involve wiping out humanity and replacing it with a new race), there is a crisis of faith in areas such as San Ilia. Many priests continued to pray to Ilias even during these events. However, the San Ilia King rallied the priests and encouraged them to hold onto the principles of the faith (such as each man having the right to live) even if Ilias herself no longer held such principles.

In Monster Girl Quest: Paradox, faith in Ilias has waned due to Ilias mysteriously disappearing.

Another distinct religion exists in the remote Yamatai region. This religion is based around worship of various monsters, who are referred to by epithets such as "Mighty Fox" and "Mighty Snake". The village contains shrines for each of these monsters. A villager eventually has the idea of setting up a shrine for Ilias, albeit with the mistaken name of "Ill-Ass".

Relationships with other races

Monsters are dependent on human males to reproduce. However, the faith in Ilias means that most humans have been hostile to monsters for most of their history. Ilias' first commandment forbids humans from having intercourse with monsters.

In the original Monster Girl Quest, this belief was reinforced by the example of Remina: once a city where humans and monsters lived together, Ilias had her forces slaughter the inhabitants, and humans came to believe that monsters were responsible. As a result, most humans fear and hate monsters, making it difficult for monsters to reproduce. One human organisation, Ilias Kreuz, took this hostility further than most, actively attacking monsters using terror bombings. For their part, many monsters attacked humans, raping and sometimes killing them. However, there were still some cases of human-monster coexistence. For instance, Iliasburg accepted the Four Bandits, the humans and harpies of Happiness Village eventually learned to get along (with the humans providing mates and the harpies helping with labour), humans and mermaids live together in Port Natalia, the Sabasa royalty takes great pride in their monster bloodline, humans and various species of monsters live together in peace and harmony within Grand Noah, the humans of Yamatai worship monsters instead of Ilias, and the humans of Grangold agreed to coexist with the Ant Girls. After Ilias' fall, humans and monsters throughout the world begin to work towards coexistence.

In Monster Girl Quest: Paradox, the Slaughter of Remina never occurred. Combined with the weakened faith in Ilias, this resulted in humans and monsters generally coexisting. This is best illustrated by monsters living even in places such as Iliasville and San Ilia. However, there are still some areas where hostility to monsters remains, such as Luddite Village.

As the servants of Ilias, the angels were initially seen as holy beings. Humans were unaware of their true nature: they are just as lustful as monsters, and will rape and kill humans if Ilias orders them to. Humans were also unaware of the true grotesque appearance possessed by some angels such as Power Muzukiel.

When Ilias had her angels attack humanity in the original Monster Girl Quest, many humans had trouble believing that this was happening. After Ilias' fall, the angels were lost due to the lack of their leader. Humans forgive them for their crimes and allow them to live peacefully on the surface world.

In Monster Girl Quest: Paradox, all angels have fallen to the surface world. They have retreated to hidden enclaves such as Enrika and the Snow Continent. However, some angels from the latter area trade with humans, by disguising themselves as human merchants. 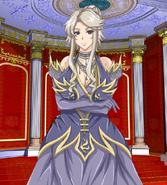 The Grand Noah Queen, one of the lords of the human kingdoms.

The Sabasa King, another of the lords of the human kingdoms.

Heinrich, a legendary hero.
Community content is available under CC-BY-SA unless otherwise noted.