Grangold is a location in Monster Girl Quest Paradox, and is the capital of the Gold Region.

Grangold, one of the major powers of the world, with the castle locked up tight due to war or due to something more sinister...

To those travelers wanting to reach here, beware of the various monsters that lurk outside these walls - Wing Harpys and Harpy Knights look for men to kidnap, and Flower Mantis Girls stalk from the shadows. There are also Scyllas as well as Medusas that might attack travelers if they feel like it. Sometimes you'll find a Butterfly Girl, but she too will also attack. Rarely, you might come upon a rogue Mud Golem Girl that has escaped.

If you wish to travel westwards, one must get permission from the Grangold King, but that is easier said than done. Why would anyone want to go westward? There's the Gold Volcano that is said to be where Salamander resides. Scenic Hill also comes to mind, as well as the Lady's Village that is right next to it. Of course, one can't forget the reason why most people want to head westward - Succubus Village is the dream for most men. But, one needs to pass though the Nightmare Plains to reach it. Further westward leads to a Tartarus Pit that very few dare approach. Thus, one might instead be heading to the Holy Wings Shrine that is said to be where the legendary Garuda Girl once was. Or, if perhaps you have a death wish, the Devastated Plains might be your destination.

This place is the epicenter of a strange aura that seems to drown the inhabitants of the region in lust, while the country itself is warring against its neighbors. Luka is sent there to assassinate the responsible lord while accompanied by Mephisto. Once they enter the city itself, they pretend to be affected by the aura to full the Ant Girls checking the population around. They meet with the head of the mafia in a bar, and Luka and his companions are utterly shocked to discover that said leaders are none other than Lazarus and Merlin. The two men accompany the party into the sewers that lead to the Grangold Castle while their men spread chaos through the city using a surgical bombing strategy. However, they're forced to remain behind to hold back a berserk Grangold King.

In the castle, Luka find out the imprisonned Queen Ant, confirming them that Lilith is indeed responsible for the spell over Grangold. The party also meet Alma Elma, who inform them that Astaroth and Morrigan left to the Monster Lord's castle to recover after having imprisonned the Succubus Queen. Luka eventually reaches Lilith, before Tamamo No Mae reveals herself as the one responsible for the aura. The kitsune proceeds to wreck the party, who's saved by her counterpart in this world. While the two Ancestors fight each other, Luka faces Lilith, who tells them that Astaroth had praise for the party's powers. She's shocked to be beaten back by the party, and make her leave telling the hero she expects great things from him.

In the meantime, Tamamo is barely holding about her counterpart, and is bailed out by Nero and Neris who make the castle collapse in their fight. Fortunately, everybody managed to escape safely and the aura gradually clears away.

The city is invaded later by an army led by Spider Princess under the Monster Lord's order. Luckily, her army is rushing in on the castle, unaware that the king is in the warehouse on the side. Luka arrives in time, and is forced to face an Arachne Lord, a Tsuchigumo, and an Atlach-Nacha while the king show up and engages Spider Princess in a fight. Too confused by the situation, the Spider Princess retreats. 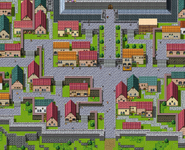 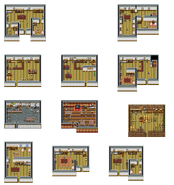