Located northwest of Sabasa Kingdom in the Sabasa Desert North. This bit of paradise in the desert is really the place to party as it's home to the Grand Theater and a nice Casino. Before setting off on the next adventure be sure to take in some culture! We have foods from all over, some that you might not find for miles around! For those looking for a bit of fun, our resident battle fucker Melody is waiting in her tents in the lower right corner. Oh, and don't even try to sneak into the mansion that's down main street, rumors say that the Don Father will silence any who do...

But maybe you're just here to investigate the rumors about a Succubus idol who's hogging the stage? Maybe you would be able to play out scenes with your companions once the place is free. Who knows? 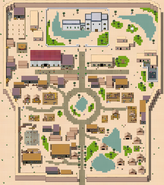 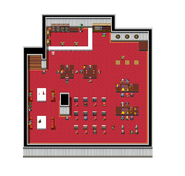 After Saki is defeated, the manager allows your girls to perform on stage and subsequently awards you with food, scrolls and other items. To unlock these performances you must speak to him with Saki in the party. You'll also unlock "Saki-Chan's Live Night" in which Luka can pay money to have various sexual acts done to him by Saki in front of a crowd. If he has the Saki pass (Which Saki gives you at 100 affection), Luka will not need to pay any money when selecting Saki-Chan's Live Night. The performance names are only rough placeholder translations and will probably be different when Dargoth gets around translating them. Part 1 only goes up to The world of an Apoptosis, every performance afterwards is part 2 only.

*Rami talks during the performance, but doesn't appear on stage