Grand Noah is a location in Monster Girl Quest Paradox

Grand Noah, one of the major powers of the world, well renown for its Colosseum. Travelers from all over compete in order to take home the prize. Grand Noah is ruled by the Grand Noah Queen who is helped by Mephisto, her advisor and also head mistress of the Magic Academy north of Grand Noah. Claims that Mephisto is a spy have gone unanswered.

If you wish to participate in this year's Queen Cup, beware of the two favorites this year: the Dullahan Arthur and the Cerberus Caesar. Rumors also say that the powerful succubus Kyuba will also show up, who has won every tournament she has participated in. It's highly unlike that any teams other than these three will win, but who knows? Perhaps if you get some Dragon Scale Fossils from the Fossil Mines south of Grand Noah, you'll stand a chance...

Last but not least, the ambiance in the city has become more tense following the declaration of war from Grangold. The army's ranks are swelling, and people are worried about their future as the monstrous golems from their neighbor threaten their nation.

This place is later invaded by an army of elves and fairies, commanded by Queen Fairy and supported from afar by Queen Elf. Queen Fairy claims that humans have been using their homes as their resources forcing them to go elsewhere for shelter, until she decided to cooperate with the Monster Lord to get Grand Noah for themselves. Once defeated, her and her army fall back even as she says that the war isn't over.

Later after the initial war, The Queen of Grand Noah suggests organizing a meeting with the other rulers of major power. Mephisto suggests a counter attack by having Luka rush their headquarters and defeat the remaining leaders while they are regrouping. They also later hold another meeting to discuss a way to get to Hellgondo to end the Monster Lord's plans, as the only known access which used to be a cave has collapsed. Luka's main companion suggests getting the Six Orbs to summon the Garuda Girl to reach the unpassable mountains. However, Kraken intervenes and inform the party that the Blue Orb has been destroyed by Astaroth. Luckily, Alicetromeria/Ilias knows that the blue orb was in Black Alice's castle during her reign, and can as such be grabbed in Gold's Tartarus.

The city ends up as the central point of the Collab Scenario. The Grand Noah queen attempts to gather information, but gets brainwashed by a monster named Musette, and throws Lest into prison. After the latter escapes thanks to the support of Novissa, the Château des Romances is summoned and the city temporarily disappears. Fortunately, the heroes successfully storm the castle and the city returns afterward.

The city still has a minor role in the post collab. First, the heroine still detects traces of the Château des Romances, and the castle itself can still be accessed in a street. Fortunately, only the heroes can see and access it to go search the now-hiding Gilgorn and Fulbeua. Secondly, the Grand Noah Queen informs the party that they're still searching for Musette and her goons for their crimes, but they're short of leads, although Mephisto remarks that since they look like angels, it would made sense that they went into hiding on the Snow Continent. Third, Est is apparently fighting in the colosseum to enjoy the sensual nature of the fights and can be beaten again to finally be recruited. 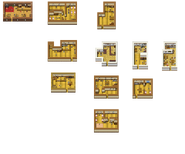 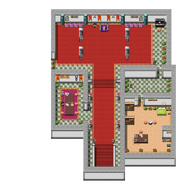