She's patiently waiting at the Safar Ruins. As Luka progresses, the player can see herself and her mud dolls following him out of pure curiosity before disappearing away. Just like Sylph, she challenges Luka as the hero wants her power.

Once beaten, she joins the party and make a contract with Luka.

“Holding huge magic, the Earth Spirit Gnome can freely manipulate the Earth itself. However, she has very little combat experience, so she doesn’t know how to effectively use her magic in a fight. Gnome usually spends her time in the desert playing in the sand and mud. When she senses a human approaching, she will usually hide and silently observe them.

Due to her curious nature, if Gnome catches a man, she will take her time to play and inspect him. To replenish her magic, she will use her mud dolls to collect semen.

If you defeat Gnome, she will lend you her power. When she possesses you with her spirit body, you can use her Earth magic.

Though it looks like she bullies Sylph, it may just be because she doesn’t know how to express her feelings."

Gnome, being the Spirit of the Earth, is naturally immune to earth based attacks. So don’t use those, obviously. She has a lot of health, but her damage output is relatively small for a boss. But be wary of her lust based attacks. The only element she is naturally weak to is water so if you have companions with water based attacks (like slimes), they will make the fight much shorter.

"Even if it's called a great spirit, it's still a monster. Don't you feel pathetic at being made into a little girl's toy? Gnome is a physical based opponent, with a variety of physical attacks. In addition, her earthquake will cause earth attribute damage to your entire party. If you have trouble, darkness and blind status effects can prove effective against her. Sleep can also work moderately well. She is a tough opponent, but she can be defeated with concentrated attacks. Furthermore, she is weak to water based attacks. She has a big HP pool, but... Anyway, please make full use of elemental based magic to beat her down. Now go, oh brave Luka. Destroy Gnome, and put an end to the faith in monster spirits." 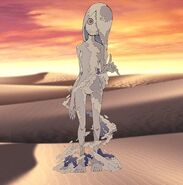