Giganto Weapon is a type of chimera that operated during the Great Monster Wars a thousand years prior. Armed with sheer brute force, the weapon was so powerful that it was kept locked up in the Monster Lord’s Castle. Like a normal chimera, it is emotionless and attacks as it pleases.

As Luka ventures through the Monster Lord’s Castle, the Four Heavenly Knights observe his progress; Tamamo decides it’s time to use “that” to amuse themselves.

Continuing on, Luka senses a horrible presence. In the shadow lurks a lowly Imp; he speculates that she is not the cause of the presence, and then swats her aside. Just then, the abomination crashes through the roof with Tamamo riding its back. She takes a moment to briefly explain the origin of the weapon, and disappears.

Luka barely manages in the battle; just as he finally whittles away all of the beast’s health, however, it enters a regenerative state and heals. Salamander chimes in and tells him that he must damage her faster than she can regenerate, and teaches him Vaporizing Rebellion Sword. With that technique, the Giganto Weapon is sealed into what appears to be a lion.

Conquering the beast, he thinks back to the chimeras he fought earlier: why are they and the Giganto Weapon so similar?

When Promestein lays siege to the Monster Lord’s Castle, Tamamo summons the unsealed Giganto Weapon; Promestein is surprised, not expecting to encounter another person to have knowledge of the chimeras. The Giganto Weapon mows down the Chimera Beasts, but is made short work of by Arc-En-Ciel, who is a bit disappointed at the Giganto Weapon’s display of power, but Promestein states that it used to be a lot stronger in the past.

Later, Tamamo once again repairs the Giganto Weapon and uses it as a steed to venture the world; it appears again in Enrika, slightly stirring up the residents until Luka and Alice clears up the misunderstanding.

“An artificial monster created at the time of the Great Monster Wars. Containing the superior aspects of many different monsters, she's an incredibly powerful Chimeric monster. Discovered unmoving in an unused portion of the castle her creator is unknown. Using the knowledge remaining from the Great Monster Wars, she was able to be repaired to the point of being operational again. Despite that, she is still far weaker than she was during the Great Monster Wars.

Though she follows the orders of the one she registers as her master, her destruction impulse is so strong she sometimes goes berserk. Binding any animal with her tail, she will mechanically squeeze out their semen to use as her power source. Of course, the most energy dense semen is found in human males.”

Semen Squeezing Program: Attack used as preparation on the first time. This needs to be guarded to avoid it. The second time this attack will lead to a one hit KO via instant follow-up.

As a biological relic from a thousand years prior to the game's events, as well as a chimera, she should definitely not be underestimated. Giganto Weapon has many deadly attacks, so Gnome is necessary for this fight. Additionally, Disrupting Roar can put Luka in paralysis, so Sylph is also mandatory. Starting off the battle with the Undine + Serene Demon Sword combination can whittle some of her health away. Saving SP for summons and Meditation is strongly advised.

Aside from her high damage, her Semen Squeezing Program acts as a KO move; her tail expands, ready to grasp him. If Luka does not Guard, it will end him.

Overwhelmed by the beast, the tail grabs him as he is brought to the female body of the creature, being stimulated by the hole within the tail as the Giganto Weapon’s tongue licks his, absorbing his energy from two different ends. With that, the beast emotionlessly extracts all his semen and discards his lifeless corpse.

“Giganto Weapon... That prototype was still able to move...? Her attack power is extremely high, so you'll need Sylph and Gnome to mitigate as much damage as possible. In addition, Sylph will help you avoid a status inducing attack. There's no bind, but her attacks will be too painful to endure without Gnome. If you see her charging up a move, make sure you guard.Otherwise your death will be assured the next turn. Her HP is enormous, so a long battle can't be avoided. But since you were able to make it all the way here, you should be able to beat her. Now go, oh brave Luka. Dispose of that biological weapon.” 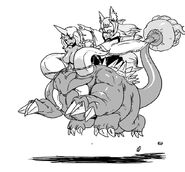 Tamamo riding Giganto Weapon as shown in Monster Girl Quest: Beyond The End.
Community content is available under CC-BY-SA unless otherwise noted.