A quiet village that resides near the sea, Finoa is merely another place that has been affected by the ongoing war. There isn't much to do here, but if you need a place to restock after traveling across the seas and before going to Grand Noah, Finoa is the place to go.

This place is also the key area of the Collaboration Scenario for chapter 2 and 6, as the village falls victim to a twisted game organized by a succubus named Myusca, supported by her partners Nemea and Vinum who trapped everyone into a maze to feast on them. They also brought in Lampas and Spirit Fox who're mostly here to enjoy the numerous available preys.

Kazuya wakes up here without knowing why before hearing Myusca tell everyone about her game. As he progresses, he soon recruits a Lampas he accidentally burned and Hakunen, another hero from a different world. They meet Myusca, and are forced to flee when they realize they're completely outclassed. More villagers fall prey to Myusca, who stops chasing the hero for fun for a moment, and a disgusted Spirit Fox joins the party. After a while, the White Rabbit appears and explains the situation to the group. Eventually, they are forced to fight Myusca, and after barely managing to graze her, they're surprised by the presence of the "Proof of Collaboration" carried by heroes on her arm, and exploit her surprise to flee outside... To fall right on Vinum and Nemea feasting on villagers.

Fortunately, the two succubi decide to let the heroes be. When the group enters the next house, they meet Mukuro dolls that are acting mechanically. After escaping Nemea a few more times and sneaking past a passably bored Vinum, the party meets Kagetsumugi who is revealed to be the responsible for crafting those dolls. The puppeteer unleashes a stronger version that still presents signs of her old personality, and, after the party beats the doll back to her senses, Kagetsumugi leaves while Mukuro joins the party. The party is then chased by Vinum. As they're about to finally escape the village, they're blocked by Nemea and fight her. Unfortunately, they barely manage to hold her back before Vinum and Myusca arrives. Fortunately, Magatsu, Lauratt and Rigeo arrive to save them.

Luka and his companions show up late to the party, as everyone already left when they arrive, and they can only contemplate the grim remnants of the succubi's feast before Mephisto informs them that Grand Noah has been replaced by a large castle.

Myusca, Nemea and Vinum return there once the collab is complete. However, they don't attack the villagers, instead transforming a house to force heroes in debauched trials for their own amusement. After the heroes successfully cross them all, sometimes by breaking them, the succubi face the party and join them after being defeated. The village finally returns to peace afterward.

Map of the area 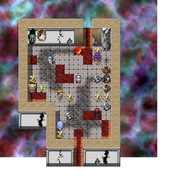