MonsterGirlQuest Wiki
Register
Don't have an account?
Sign In
in: Artist: UN DO, Fairies, Forest of Spirits,
and 7 more

The Fairies are a set of monsters within the Forest of Spirits, first encountered in Chapter 1 of Monster Girl Quest.

As Luka traverses through the forest, he accidentally steps on one of the fairies hiding in a flower from the Chimera Dryad. He can either say “Sorry!” or “Oh, shut up!”, the latter leading to a battle. If the former is selected, he will earn EXP from the battle as well as the Fairy Acorn, a component needed for the Jewel of Friendship and the Hero's Proof Achievement. Luka then thanks the fairy and moves on, carefully avoiding the flowers. If Luka does battle with them, the fight ends once Fairy A is sealed, resulting the rest of the Fairies pestering him into turning them into butterflies, forcing him to retreat deeper into the forest.

Once he defeats the Chimera Dryad that's been menacing the other monsters in the forest, the fairies thank him for vanquishing her. Afterwards, they all descend upon San Ilia to prank the city. They can all be found interacting with, or playing pranks on various townsfolk, including the King, who had his crown swapped for a vase, unbeknownst to him.

By this time the city seems to have accepted the fairies, as the King starts telling them all bedtime stories. However, Goddess Ilias's forces soon lay siege, with one of the fairies recognizing the opposition's strength as similar to that of the Chimera Dryad. When Catoblepas Girl tries to assassinate the King, the fairies rush to his aid and restore his health.

“When a large group of fairies come together, they usually have a leader. If someone antagonizes the fairies, the leader is said to instruct the others in how to attack and defend themselves. Their attacks generally involve playing tricks and tormenting the antagonist. While a single fairy isn’t too dangerous, a large group cannot be taken lightly.

Palm sized fairies are difficult to catch or hit. If a large amount of fairies are able to cover your body, there is little you can do to get them off. Once caught, there is nothing that awaits you but miserable days of being played with by the group. It’s very dangerous to antagonize fairies, so be sure not to anger them.”

This battle can be rather troublesome, as they can attack three times in a row. Additionally, their restraint can be rather difficult to Struggle and break from, and is potentially dangerous. Quickly bum rush them with Death Sword Chaos Star before they make matters worse.

If Luka loses, they restrain him and toy with various parts of his body. Afterwards, he’ll be played with for the rest of his life.

“No matter what, defeat isn't allowed for a Hero. It looks like you don't understand this. When fairies collect like flies, they become threatening. This fight may be rather difficult... You may have no choice but to attack slowly as you use SP for recovery. It's also extremely dangerous when you're bound. It may be too late already, but you must struggle right away. In addition, it's possible to avoid this fight altogether. If you can't win no matter what you try, it's always a choice to skip it. Now go, oh brave Luka. The interior of the forest is only a small ways ahead...” 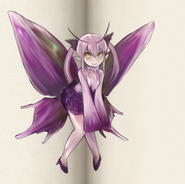 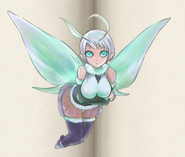 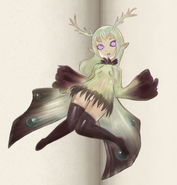 Drawn by UN_DO.
Community content is available under CC-BY-SA unless otherwise noted.