Esta is a location in Monster Girl Quest: Paradox

Esta was once a thriving town... but now everyone is gone. Without permission from the Queen of Grand Noah, no one except the investigative team are allowed in. Much like Rubiana, not a single soul remains. There are signs that the people went of their own will, signs and letters all indicate that the villagers believed that they were heading off to a new land. Perhaps it has nothing to do with it, but living next to an ever-growing Tartarus pit surely isn't good for one's health... The Tartarus is inaccessible: even if one were to row their way to it, there isn't a way down.

When Luka arrives to investigate the disappearance of the population. His mind is temporarily brought to an alternate version by Raphaela to show him the wonder of a world that lives under the benevolence of Goddess Ilias.

While people around the place look happy and live with angels, it is clear that most aspects of their lives are fully controlled by the goddess, and the only noticeable dissenter is instantly smitten. After a few minutes of exploring, bells ring and Luka can enter the cathedral to see Raphaela for herself. Their discussion is interrupted by Saja, who tells the hero that this world is a parody of existence. Luka then returns to the real world to see his friends surprised by his mental fugue.

As he explains what happens, his companion is surprised to hear about Saja. As the party investigates Tartarus, they notice there is no way to enter the Tartarus. As they return on dry land, the party gets attacked by Gnosis (Alice route)/Zion (Ilias Route) 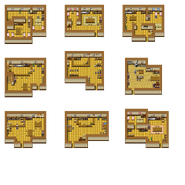