Emily is the sadistic, bratty daughter of Cassandra born of the Scylla line. Like her mother, she is very cruel, toying with her catch until the point she devours them. She also enacts upon illeism (refers herself in third person).

Upon arrival at the Lady’s Village, Emily greets Luka and entertains him until he meets her mother; Cassandra then excuses Emily afterwards.
After Luka realizes the truth behind the Lady’s Village, he engages Emily. Upon being sealed, Cassandra shows up. Emily begs her mother to unseal her so she can fight alongside her, however, much to Luka’s shock and horror, Cassandra devours her own daughter for her incompetence. Emily dies with a horrible, pained scream as she is dissolved; Cassandra states the world revolves around survival of the fittest and that she had no use for a "weak" and "stupid" daughter.

“Daughter to Cassandra, she’s a monster from the Scylla line. Though she is still a young girl, she boasts both powerful magical and physical ability.

Despite her carefree manner, she is surprisingly cruel. She loves to use her tentacles to play with men until they die. It’s unknown how many have been killed by Emily. Using her tentacles to bind the male, she enjoys playing with them as she watches their agonized expressions. This will continue until Emily grows bored of them, where she will then quickly finish them off.

Her mother; Cassandra, has the genes of many different families of monsters within her. The Scylla genes took dominant control in Emily during Cassandra’s pregnancy.”

Despite being classified as a boss-leveled monster, she is not too difficult, being only slightly stronger than the Scylla Maid. Still, she has her binds and high damage, so Gnome is a must. Sylph and Lightning Sword Flash  can be used to expedite taking her down.

Succumbing, Emily binds Luka using her tentacles and toys him with them. Easily bored of the premature ejaculator, she keeps bringing him to an orgasm until his death.

“Killed by a young girl's tentacles this time? If you love tentacles that much, would you like me to reincarnate you as an octopus? Emily is very tough, and has some powerful binding moves. Due to that, Gnome is required again. Even if you like Sylph, she really isn't that useful here. But if you're struggling against her, you could attempt to depend on the low evasion chance and upgraded sword skill. Now go, oh brave Luka. You must defeat the mother and daughter to stop any more people from becoming victims.”

Emily in her human form. 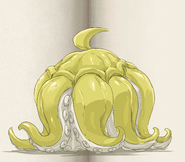 Sealed Emily.
Add a photo to this gallery
Retrieved from "https://monstergirlquest.fandom.com/wiki/Emily?oldid=103013"
Community content is available under CC-BY-SA unless otherwise noted.