Dagon is an aquatic monster of the northern seas. She often poses as a mermaid to trick careless men and sucks them dry.

On his way to meet Poseidoness, Dagon attacks Luka. She disguises herself as a mermaid before revealing her true form.

“A monster that lives in the Northern Sea. Posing as a mermaid, she catches careless men who dare to get too close to her. Her mimicry isn't that great, but due to the obfuscation of the sea water, some men have been known to be tricked. In addition, due to living so close to the northern continent, she is quite a powerful monster.

Once she catches a man, she uses her lower body to wrap around him, squeezing out his semen. An overly happy, innocent monster, she has been known to squeeze men to death with a carefree smile on her face.”

Forcible Semen Squeeze: Binded attack which leads to a one hit KO via instant follow-up.

Disguised as what appears to be a harmless mermaid, she says to have a present and asks Luka to near. If he chooses “Approach”, she'll reveal her true form and put him in a bind; without Gnome, the restriction is unbreakable and he falls prey to her.

If he does not approach, she reveals her true form and decides to take him by force. She often aimlessly swims around, as all her attacks are only bound ones. Using the Undine + Serene Demon Sword combination, she falls easily.

Succumbing to pleasure, she continues squeezing Luka’s penis with her tentacles until he faints, and is kept in her umbrella as a semen slave for the rest of his life.

“My, how nice it must be to do nothing but live a life of heresy. Surely giving in to pleasure isn't worth becoming a slave, right? Right? Her restriction attack is very powerful, so don't neglect summoning Gnome. If you're bound without her, your defeat is certain. Sylph's evasion rate isn't very high, so you're better off ignoring her. Also, the enemy's evasion rate is high, so you may want to use sword skills. Now go, oh brave Luka. ...Certainly there is nobody dumb enough to be tricked by a Dagon, right?” 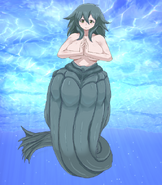 Dagon’s 'mermaid' form.
Add a photo to this gallery
Retrieved from "https://monstergirlquest.fandom.com/wiki/Dagon?oldid=103123"
Community content is available under CC-BY-SA unless otherwise noted.