North of The Haunted House

Chrome is a character in Monster Girl Quest: Paradox. She is a necromancer and a member of Artiste family.

Chrome can be encountered first in the Haunted Mansion, like in the original trilogy.

Luka has the option to investigate a Haunted Mansion north of San Ilia, said to be inhabited by a necromancer. If he pays a visit to the mansion, he will encounter many recognisable monsters from the original trilogy, such as Zombie Girl and Cursed Doll Girl. Luka finds Chrome on the third floor of the mansion, but she runs away. Luka and the party pursue her into the next room, and Chrome summons two zombies to drive out Luka, but they both throw Chrome out instead.

Luka goes back out to the outer corridor, where he finds Chrome again. He corners her again here. At which point she tells Luka it’s all part of her master plan to lure him into her trap.  Her plan doesn’t work as she has the trapdoor in the wrong place. She falls through it instead.

Luka returns to the entrance hall, where the bookcase blocking the stairway is now gone. Luka goes down the stairway and confronts Chrome for the final time, along with Frederica. Chrome and Frederica fight Luka together, but Luka and the party beat them. Afterwards, Chrome gives her story about how she wanted to make the ultimate zombie to restore her house’s standing in the eyes of the monster lord. Chrome considers shifting to doll craft instead of using necromancy, which Luka reassures her should be fine.

If you talk to them again, you can ask Chrome to accompany you on your adventure, and she will reply that she will if you bring her some Magic Thread to help her make the Dolls. You can find the thread in the Puppeteer’s Tower.

“A monster with top-notch necromantic abilities. Chrome is a type of succubus, but due to her focus on necromancy, her powers of seduction are at an Imp’s level. She’s obsessed with satisfying her curiosity and is going to extreme lengths to create the perfect zombie. Chrome believes that Frederica, her ultimate creation, still holds room for improvement. Though her powers of seduction as a succubus aren’t very high, her ability to summon zombies is very dangerous. Even a skilled adventurer can quickly be overwhelmed by the zombies she summons.”

Frederica and Chrome are a unique boss fight as they fight you at the same time as one another. Because of this, it can make dealing with them tricky. Frederica has a lot of health, but you will target Chrome before Frederica. Chrome has a few punishing abilities. One of these is Auto Crossbow, which hits the entire party, while also being guaranteed to land. It also does a decent amount of damage, and there’s no way to avoid it. Thankfully, she doesn’t use it very often.

I’ll Give you An Injection can also be problematic, depending on who it hits. If it hits someone important in the party, it will knock them out of the fight for a short time, but it also deals minor DOT. Outside of those two attacks, you don’t have to worry about her too much.

Since she’s a succubus, don’t use wind and pleasure attacks, but she’s also a necromancer, making her immune to sonic and bio attacks too. Focus on earth and Holy attacks to fight her.

“To be violated by that necromancer… My civility is nearly at its end. Chrome uses a lot of healing and support skills. She can also bring out various attack weapons. But confusion is quite effective, so use that. If she can’t act properly, the battle will be much easier. In a normal fight, you should defeat the healing Chrome first… But if you manage to confuse her, defeat Frederika first. Now go, oh brave Luka. Drop your hammer of justice on that immoral researcher.” 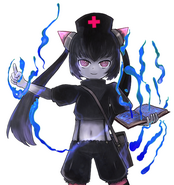 Cut-in 2
Add a photo to this gallery
Retrieved from "https://monstergirlquest.fandom.com/wiki/Chrome/Paradox?oldid=91313"
Community content is available under CC-BY-SA unless otherwise noted.