View source
watch 03:01
Wiki Targeted (Games)
Do you like this video?
Play Sound

The Chimera Dryad is a chimera created by Promestein that attacks the Forest of Spirits for unknown reasons, encountered in Chapter 1 of Monster Girl Quest. Apparently emotionless and devoid of intellect, it is an unknown monster that attacks anyone, human and monster alike, that stands in its way. It is believed to be a parasitic plant that devoured the corpse of a human female, however the body is actually the chimera’s base.

Chimera Dryad is first mentioned by the Elf, who warns Luka about the mysterious monster. The presence of the chimera has made the Elf even consider contacting the Monster Lord for aid.

After Luka recruits Sylph, the Chimera Dryad reveals itself. Even Alice knows nothing about it. It then attacks Luka and Alice, but they manage to evade the attack. In response, the Monster Lord retaliates with Omega Blaze, but the attack doesn't even phase the creature. Luka convinces her to leave and let him fight it as it is his duty as a hero. As Alice leaves, she warns Luka to be careful.

During the battle, Sylph reminds him that she will be at his side, and he summons her. With a powerful gust of wind, the chimera’s attacks are rendered useless.

After a long battle, the chimera is finally sealed. However, unlike other monsters she dissolves into thousands of leaves and petals.

Instead of her showing up as a Boss in Monster Girl Quest Paradox, the Armored Berserker was put in her place instead. This can be speculated that Promestein has not started creating chimeras yet and was replaced in hopes to follow the correct timeline.

“It appears to be a plant-type monster, but the details are not uncertain. Apparently a parasitic plant took over the corpse of a human female. Its unique structure allows it to regenerate extremely quickly. A unique monster never seen before, the fight sighting was in the Forest of Spirits.

Apparently devoid of intellect, it mindlessly catches prey to sate her thirst. Regardless of race or sex, she attacks anything that moves and sucks out all of their bodily fluids. Strange flowers bloom all over her body that are capable of sucking any fluid out of any body part. After draining her prey's body dry, the corpse is wrapped in her plants as she breaks it down and fuses it to her body.

A very strange being, her existence is even feared by other monsters.”

Rose of Strangulation: Attack where the first turn is the preparation of it. When attacked this will lead to a one hit KO via instant follow-up.

Floral Funeral: Attack following after Floral Funeral Preparations and leading to a one hit KO via instant follow-up.

Being a chimera, she is not to be underestimated. She has various attacks, a trance, and a bind that can overwhelm Luka with ease. The use of Death Sword Chaos Star can help whittle her HP down.

There are two issues with this battle: her bind and Rose of Strangulation. The former requires struggling unless she prepares Floral Funeral, which requires an attack to break free. The latter opens up a bright red rose on the chimera’s body, which must be guarded against.

After lowering her health by a third, Sylph chimes in and tells Luka to use her power. (Note that using her before this point is possible as well.) Doing so, her Wind Protection cuts up all of the Dryad's attacks except for Rose of Strangulation. Continue fighting normally and guarding against the Rose until she goes down, recalling Sylph if necessary.

If defeated, the chimera’s petals suck on various parts of Luka's body, ignoring his points of ejaculation. The creature then performs a vore scene where she wraps up his body and consumes him.

“Your opponent is very powerful, so you must fight carefully. It would be wise to save your SP for recovery. It's extremely dangerous when you're restrained, so you must break free right away. If the Chimera Dryad uses Floral Funeral Preparations while you're bound, you have to attack right away to interrupt it. There's a small chance that it can put you in a trance, but there's no way to stop it, so keep your HP high. Lastly, you must avoid the Rose of Strangulation at all costs. You get a warning before it's used, so use that to prepare. If you decrease the enemy's HP a certain amount, you may awaken a new power as well... Now go, oh brave Luka. No matter how powerful the enemy, never yield!” 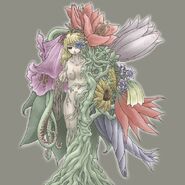 Early concept of Chimera Dryad(Drawn by Delphinus before the game released).
Community content is available under CC-BY-SA unless otherwise noted.