Ilias: "This, this Is the layer of nothingness...!? The nothingness is materialising and devouring the spaces...! If this spreads further, the whole world will become nothingness... Is that... the 'chaos covering the world' means...? We have to go further. Don`t touch it. If you touch it, the outcome will be the disappearance..."

-Ilias and Sonya, at the 3rd Tartarus

"It turns out that this world didn`t follow the correct history. Somewhere in this history, the paradox occurred, and it turns every space and the world itself into chaos. Chaos is the nothingness. Both are the same thing. And the most significant paradox it seems originated from this other universe. The paradox from this other universe... it made a chain reaction that affected this world. And the whole parallel universes will collide with each other. Then, the whole of all universes will be devoured by the chaos... and what will be left is complete 'nothingness'."

-La Croix, at the Administrator tower

Chaos, or Nothingness, is the inter-dimensional phenomenon occurring in Monster Girl Quest: Paradox. Chaos is nothing. It consumes space-time itself and leaves nothing behind in its wake, and will continue to consume until absolutely nothing in existence remains. It began in an unknown parallel universe where the first paradox occurred and has begun to spread to all of the other universes. The Paradox was a result of a universe not following the correct history. The original trilogy is considered to be this true history.

The apoptosis phenomenon is an immune mechanism phenomenon of twisted dimensions to make slow down the spread of chaos by preventing inter-world interactions, which are fruitless endeavours since the chaos spreads too fast.

It is revealed at the end of part 2 that the first universe that did not follow the true history, and which is consequently spreading chaos to the other ones is the Paradox one. The only reason it isn't at an advanced stage of destruction is because Seraph Eden and Ilias were holding the chaosization at bay in Ilias Temple Ruins.

This phenomenon has been started by the Great Disaster, when a Black Alice infused with the power of Goddess Ilias was brought by an experiment, her power and her presence alone turning the world back to its original state of nothingness.

On Alice's route, it is revealed that Nuruko is the spirit of chaos, confirming its nature as a natural element. The true scope of her power hasn't been fully revealed. 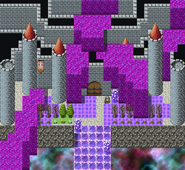 At the epicenter of the Great Disaster, Remina is heavily influenced by chaosization

An advanced chaosization zone in Tartarus

Battle background in Chaos drowned zone
Add a photo to this gallery
Retrieved from "https://monstergirlquest.fandom.com/wiki/Chaos?oldid=103957"
Community content is available under CC-BY-SA unless otherwise noted.